When Coco Gauff drilled a crosscourt backhand passing shot during the first set of her match Thursday night at the US Open, the crowd in Louis Armstrong Stadium roared its approval.

About two hours later, the crowd, which included Kobe Bryant and C.C. Sabathia, roared again when Gauff ended a raucous, back-and-forth match by finishing off qualifier Timea Babos of Hungary, 6-2, 4-6, 6-4 in 2 hours, 23 minutes to advance to the third round on Saturday.

There Gauff will likely make her Arthur Ashe Stadium debut against world No. 1 and defending US Open champion Naomi Osaka. The 15-year-old Gauff has now made $163,000 by advancing to the third round of her home Slam. She’s the youngest player to reach the third round at the Open since Anna Kournikova made the fourth in 1996.

“I don’t have any thoughts on it right now because I have to play doubles tomorrow with Caty [McNally] so I’m really focused on that,” Gauff told the crowd of the Osaka match. “Saturday I’m going to think about the match but tomorrow I’m worried about my doubles match.”

Osaka, who beat Serena Williams in last year’s controversial final, looked ahead to Gauff after her 6-2, 6-4 victory earlier Thursday over Magda Linette.

“Yeah, she’s super sweet and I would love to play her, of course,” Osaka said. “For me, when I hear people talking about someone, I want to have the opportunity to play them just to assess it for myself.” 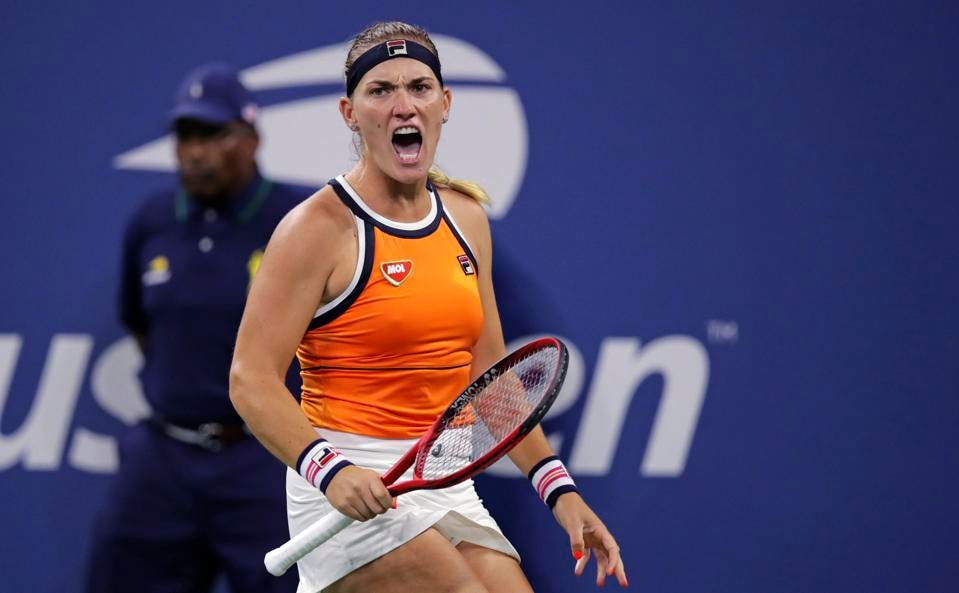 Timea Babos, of Hungary, yells after winning a point against Coco Gauff, of the United States, during the second round of the U.S. Open tennis tournament in New York, Thursday, Aug. 29, 2019. (AP Photo/Charles Krupa)

Gauff was the biggest story at the Open on Thursday night, especially after Rafael Nadal won his match in a walkover and never played his night match in Arthur Ashe Stadium. Tennis was played there but fans with grounds passes and general admission seating flooded in to the upper bowl of Armstrong to focus on Gauff, who made a magical run to the fourth round of Wimbledon earlier this summer.

But this is New York, not Wimbledon. And Gauff is showing she can make it here, too.

At one point as she was serving during the second set, the 7-train loudly rolled by behind Gauff but it didn’t seem to bother her at all. She held serve without issue.

Throughout the match, fans came and went from their seats even as play was beginning, perhaps to pick up an evening cocktail or two.

“It’s been amazing,” she said of the atmosphere. “Timea, she played so good and I’m so happy that I was able to get through, she played amazing.

“I was tested a lot. I think we were both just testing each other. If I didn’t win that last point maybe she would’ve won the match. It was just that type of match where anyone could have won.”

Bryant, who watched Osaka’s match alongside Colin Kaepernick, jumped into the ESPN booth for the Gauff match and heaped praise on the 15-year-old.

“At 15, God knows I wasn’t like that,” Bryant, a former teenage star himself, said on air.

He was asked to expound upon the differences between an individual sport like tennis and a team sport like basketball.

He said that in tennis you’re “constantly negotiating with yourself,” whereas “in team sports you have guys that can pick you up.”

Earlier he said he was impressed by Gauff’s poise and composure at such a young age.

“She’s a phenomenon for sure,” he said. 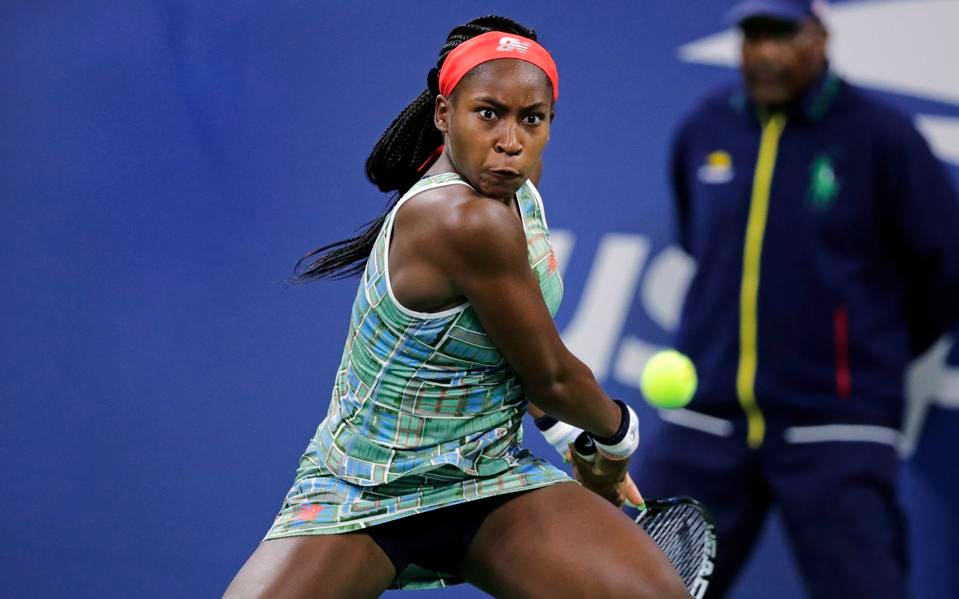 Coco Gauff, of the United States, eyes the ball during a match against Timea Babos, of Hungary, during the second round of the U.S. Open tennis tournament in New York, Thursday, Aug. 29, 2019. (AP Photo/Charles Krupa)

Gauff is already surrounded by an elite inner circle that includes Patrick Mouratoglou, who coaches Serena Williams and is advising Gauff, and Tony Godsick, Roger Federer’s agent. Both sat in her player box.

He added that for Gauff, that meant being “happy about what she’s doing,” whereas for Williams it was “more intellectual and more tactical.” Williams has to “fight against the pressure that is enormous on her shoulders.”

Williams, of course, continues to bid for career major No. 24, having lost three Grand Slam finals since becoming a mother, one of which came to Osaka in last year’s US Open final.

Now it will be Gauff who gets a shot at Osaka, the 21-year-old two-time major champion who has what Gauff eventually wants.

“Naomi Osaka is waiting in the wings,” 18-time Grand Slam champion Chrissie Evert said on air. “That is going to get everybody pumped up if that happens.”

I’m a Basketball Insider and tennis writer. A contributor to The New York Times and SportsNet New York (SNY), I am also the author of two books and an award-winning journalist and filmmaker. My articles have appeared in SLAM, Basketball Times and in newspapers nationwide. I also won an Emmy award for my work on the SNY mini-documentary on Syracuse guard Tyus Battle. A veteran Ultimate Frisbee player, I have competed in numerous National and World Championships. My Death or Glory (DoG) team won the GGM World Championship in 2018, and my teams won the Westchester Summer League (WSL) championship in 2011 and 2013. I live in Manhattan with my wife and children.