Well, that didn’t last long. Brazil is no longer the darling of emerging markets, with stocks crashing over 5% on Friday . Blame the political class, again.

There are two reasons for today’s correction. One was an immediate over-reaction to news headlines, the other is a rethinking of key market-friendly reforms needed in Brazil this year.

Yesterday’s arrest of former president Michel Temer reminded everyone that the Petrobras Car Wash scandal, the very scandal that led to two years of recession and a never-ending political crisis, will pull the rug out from under this country in seconds flat. Brazil stocks are now underperforming. But just wait until investors price in a failed pension reform, which is probably just three months away. I think that is already starting to happen and Temer’s arrest was just reminder that Brazil is in crisis-mode, making it difficult to govern.

Temer was pulled in on Thursday by Federal Police officers for his role in the Petrobras crime spree. They said he helped run an “organized crime” ring within the government: a system of pay-to-play contracts with civil engineering firms like Odebrecht building all sorts of stuff for Petrobras and skimming millions of dollars off the top. Dozens of A-list executives have been jailed now for at least three years. And yadda yadda yadda. … Temer was next in line.

To date, of the top political leaders in charge during the Petrobras contract-rigging scheme, only ex-president Dilma Rousseff is still standing. She desperately tried to become senator of her home state of Minas Gerais last October but came in third place, probably not because she loved politics or had nothing better to do for work. Now that she is a private citizen, like Temer, she has lost political immunity. 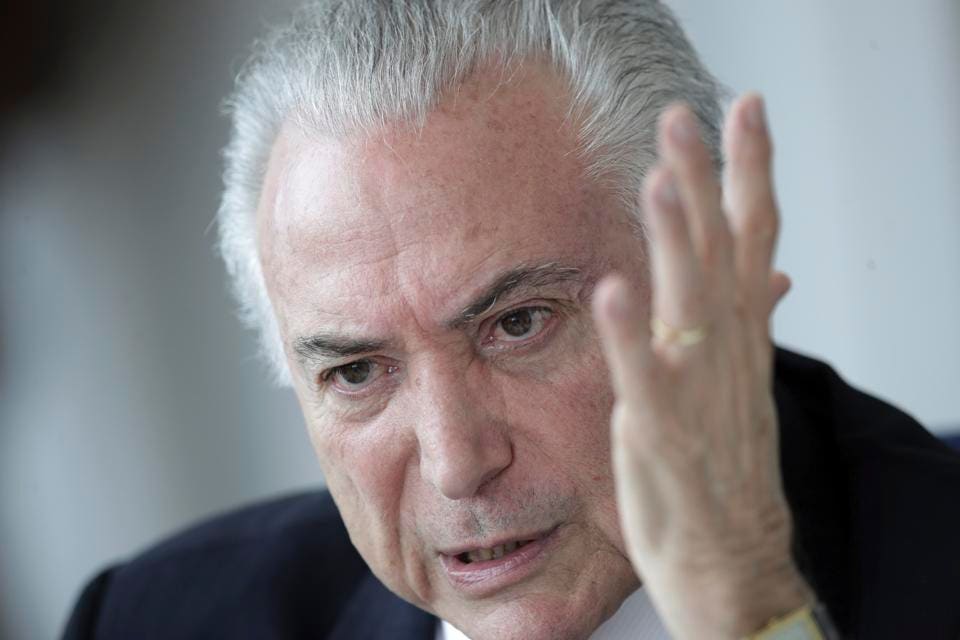 More Than What’s On Paper: The Risky Business Of Being Courageous

Dilma was impeached in a somewhat farcical April 2016 vote by the lower house of Congress for breaching budget laws. She was later indicted in August of that year, making her vice president, Temer, the new interim President. Her impeachment had nothing to do with Petrobras, though the people who instigated it did, with one of them, House Speaker Eduardo Cunha … in jail.

Brazil spent much of the last two and a half years in political chaos because of Petrobras.

Temer was the most disliked president in Brazilian history, with an approval rating struggling to get over 10%. When the election season began in 2018, it became clear that no one from the parties associated with Petrobras was going to win.

They tried hard. Lawyers for jailed ex-president Luiz Inacio Lula da Silva worked overtime trying to convince the United Nations and media influencers from London to New York that he was an innocent man, jailed for his politics. His handpicked successor was Dilma. His second handpicked successor was a former São Paulo mayor, Fernando Haddad. Haddad took it upon himself to admit that he was not his own man, even going so far as printing up and wearing T-shirts emblazoned with the ridiculous campaign slogan: “Haddad is Lula.” He visited Lula in jail for campaign advice. And so as while rubbing the face of the electorate with indicted Petrobras criminals, Haddad got beat by a family-values conservative named Jair Bolsonaro who symbolized the boiled-over anger of those who had had it with anyone affiliated with embattled oil company. 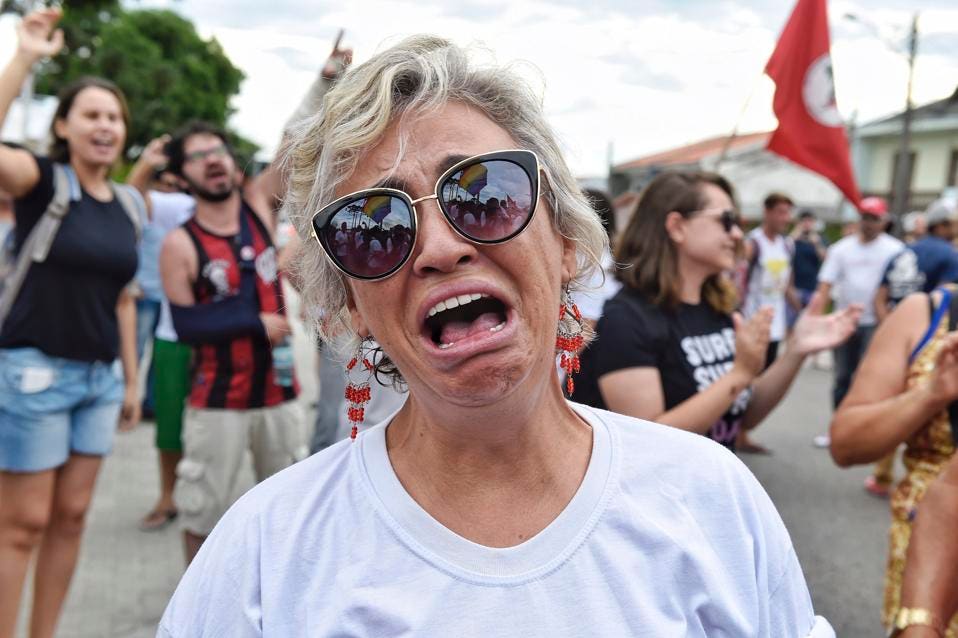 A supporter of former Brazilian president Luiz Inacio Lula da Silva cries in hopes of his release outside the federal police department where Lula is serving a 12-year sentence for corruption in Curitiba, Brazil, on  Dec. 19, 2018. No one has heard from him or about him since the start of the new year. AP Photo/Denis Ferreira

By The Way, Where’s Lula?

Lula has been totally absent from the headlines. The biggest fish fried by the Federal Police made himself part of the daily news cycle in the fall of 2018. The New York Times gave him op-ed space where he sold his political persecution story to the world. (I tried to get an opposing view in the NYT, arguing that he was not a political prisoner, but they rejected it. Tudo bem.)

Now, the disgraced founder of the Workers’ Party is spending the next 12 years in jail, at least. No one is outside his prison quarters cheering “Good morning, president Lula” anymore. He is alone and—mostly—forgotten.

His lawyers are no longer blasting reporters’ Whatsapp accounts with their latest filings of a habeas corpus or a statement by someone who works for the UN Human Rights Commission saying that the Petrobras investigators used their legal powers to jail him unlawfully. Those days are suddenly gone. And they are gone, obviously, because the election is over and the Workers’ Party lost. Lula’s “political persecution” was what it was: a political campaign for the Workers’ Party.

Temer’s Democratic Movement Party, a big-tent party of wealthy Brazilian oligarchs, one of the oldest parties in the country, also lost big in last year’s election because of Petrobras. In fact, every party that was part of the government, even those that were part of the majority opposition, got handed their walking papers because of this scandal.

It is no surprise that Temer was arrested. If the courts don’t get you, the voters will. 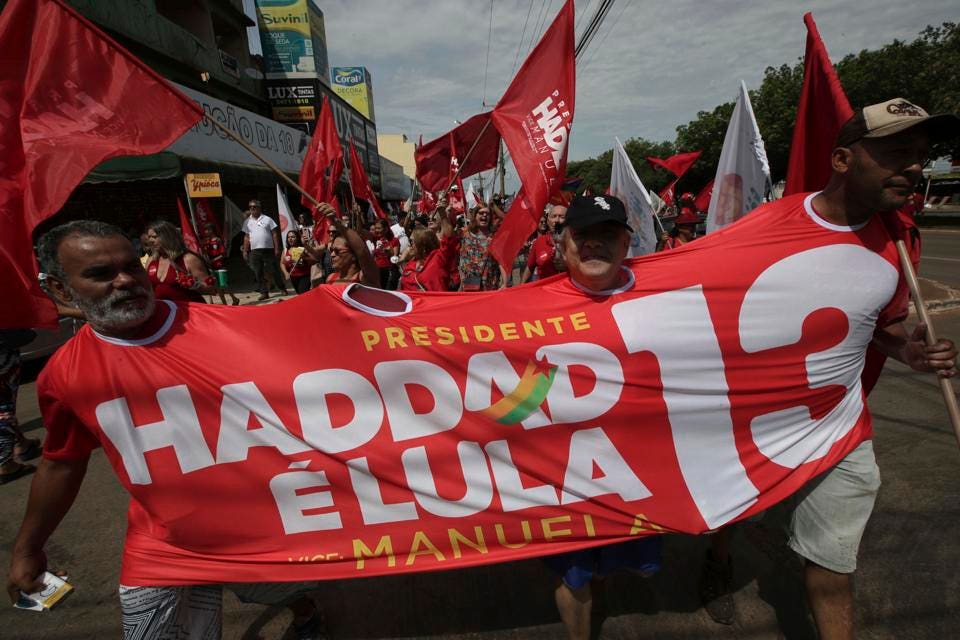 Supporters of presidential candidate of the Workers’ Party Fernando Haddad, dressed in a banner written in Portuguese: “Haddad is Lula 13. AP Photo/Eraldo Peres

Brazil’s new government rose to power out of sheer hatred of politicians like Temer and Lula. But this new government is surrounded by noise. Temer’s arrest will likely push Bolsonaro’s already declining public opinion polls lower, especially if Brazilians do not see their economic outlook improving.

Some 68% view Bolsonaro as either “good” or “very good,” with numbers for “very good” declining 15 points since his inauguration in January.

At the start of the year, Jan Dehn, head of research for the Ashmore Group, a $74 billion emerging markets asset manager in London, told me he was giving Bolsonaro until the end of the first half to get something done — on pension reform, in particular. That has been the one issue propping up Bolsonaro’s stock price. As soon as the market feels pension reform is in jeopardy, Brazil’s stock market turns the other way, and Bolsonaro is governing over political crisis and weakening investor sentiment, not much different than Temer did. 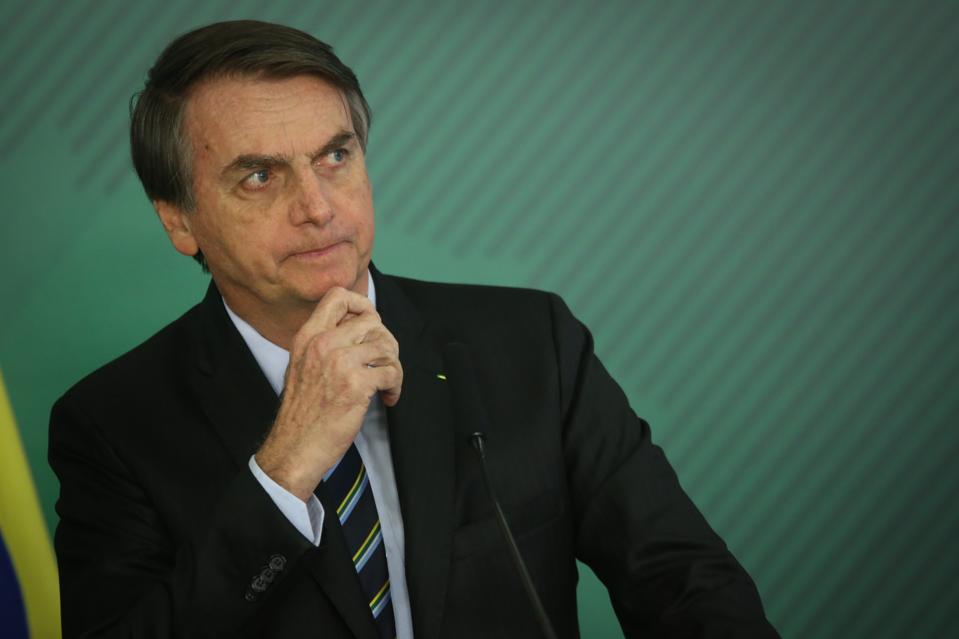 Jair Bolsonaro, Brazil’s president, said of Temer’s arrest: “Each person has to be responsible for their actions.” Andre Coelho/Bloomberg

Bolsonaro: Governing Above The Noise

It is difficult to govern in Brazil due to all the different political alliances. This is not a two-party system. Considering the difficulties already involved in the Brazilian congress, throw political crisis on top of that and it becomes even harder.

Bolsonaro was relatively quiet on Temer’s arrest, preferring to say that, “Each person should be held responsible for their actions.”

Bolsonaro wasn’t elected on an economic platform. He was always an anti-Lula, law-and-order vote.

His government’s economic team is led by BTG Pactual founder Paulo Guedes, a University of Chicago-educated markets guy who has set the course for a somewhat overambitious list of economic reforms. Bolsonaro basically put Guedes in charge of the market.

Given the complex process in approving Guedes’ measures, from pension reforms to privatization, delays are more likely today because of uncertainty surrounding Petrobras investigations than they were last week. The Car Wash investigations are not over, and that means key members of congress could, in theory, be focused on other matters, or perhaps, lose their post in key cabinet positions in worst case scenarios.

Bolsonaro’s small political party—the Social Liberal Party—was not part of the Petrobras scandal, so it is possible they will not be scrambling like the congressional leaders were under Temer’s Administration when arrests were made of private citizens affiliated with them.

On the bright side, that means Bolsonaro has a better chance to inoculate himself from the Petrobras-related arrests like the eight individuals arrested on Thursday.

If he can do that, then smaller reforms like payroll tax breaks and Petrobras asset sales might get done earlier this year. Pension reform is unlikely to go anywhere until the end of the year, Morgan Stanely analysts said in a report. This is a very different view from a month ago when consensus estimates were for some type of pension reform to be competed by July.

The rest of Bolsonaro’s economic agenda depends on how well he can separate himself and his team from the Petrobras brat pack. He will have to remind them that he is president because he was never part of that group in the first place.

For media or event bookings related to Brazil, Russia, India or China, contact Forbes directly or find me on Twitter at @BRICBreaker

I’ve spent 20 years as a reporter for the best in the business, including as a Brazil-based staffer for WSJ. Since 2011, I focus on business and investing in the big eme…