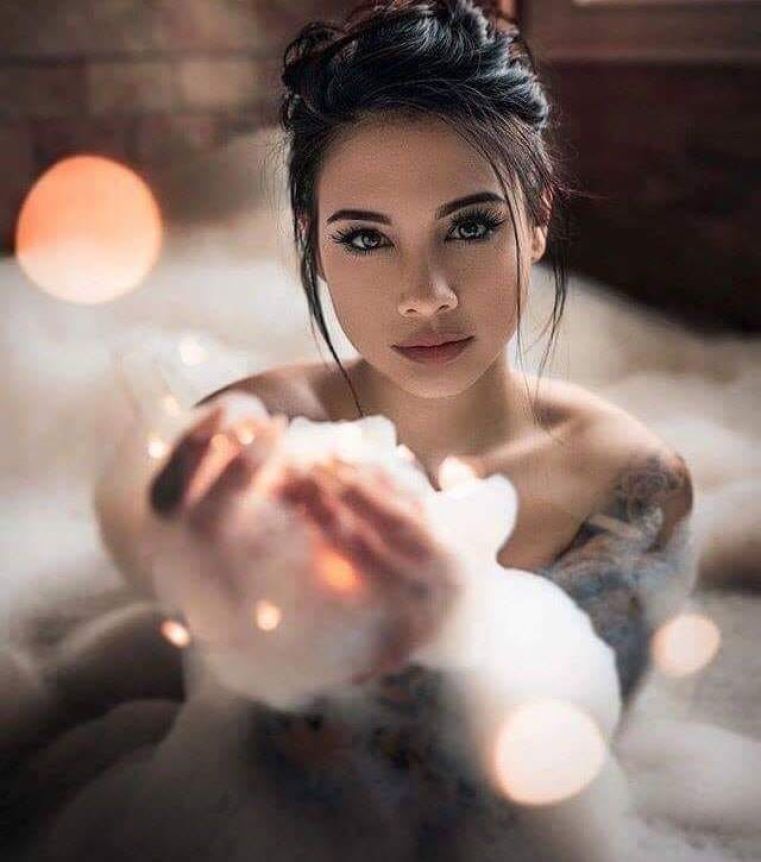 I would like to dedicate this to my muse, if I had one, but I don’t. So, I won’t. (Wink Wink) bubbles of love Soaking in an effervescent tubof your warm poetrytiny inspirationsburst all around meSparkling suds of passioncleanse my soulof the unsightly stainsof dirty loversand tainted memories For you are the nymphetof my passionsa […]

via bubbles of love — The Lonely Author

People think that your eyes are blue I know better the real you the one you show only to me I know your eyes are the color of clouds against a blue, blue sky Continue reading at Penny Wilson Writes

Most people adopting a dog expect furry affection and bright-eyed companionship. Ingrid Pipes is looking for that and something a step above.

Pipes, a 27-year-old copywriter in Pittsburgh, and her husband recently adopted Hudson, a miniature Bernese mountain dog/poodle mix, with the intent of enrolling the puppy in an obedience school that will train and certify him as a therapy dog to help treat Pipes’ depression.

“Mostly, his job would be to see signs of sadness and depression and get my attention to distract me,” she says, “like bringing me one of his toys to play, or sitting in my lap and asking to be pet.” He will be more responsive and interactive in the presence of human distress. Pipes found a few services in the Pittsburgh area that provide such training. (Some trainers even prepare pups to relieve anxiety by using their paws to put gentle pressure on a human’s chest.)

“I have high-functioning depression,” Pipes says, “so I usually make it to work, can do my chores and whatnot, but it’s always there.”

She hopes Hudson can fulfill the role of DJ, their recently deceased chow-chow. While not a trained therapy dog, DJ was a natural. “[H]e was good at distracting me,” she says. “He would lay at my feet and follow me around the house, calmly and quietly. He was the perfect shadow and never gave me a minute alone, but also would be cool with whatever we wanted to do.”

Pipes worried about relaying her stress onto a new puppy, so she sought training that would allow Hudson to thrive in occasional atmospheres of gloom and dispirit. “Some dogs definitely just get it,” she says. “If you’re feeling sad, they know to come to you. The reliability of companionship is a big part of it because your dog is molded to your schedule. They’re never going to be too busy to take your call. If you train your dog right and treat them nicely, your dog is going to love you and need you, even if you’re failing in every other part of your life.”

Research has consistently shown that animals, particularly dogs, provide psychological benefits for humans—although the exact reasons are not known. “It’s a popular topic right now,” says Lori Kogan, a professor at the College of Veterinary Medicine and Biomedical Sciences at Colorado State University and editor of The Human-Animal Interaction Bulletin, the journal of the American Psychological Association’s group dedicated to that topic.

“People are trying to validate what people already know: that animals make us feel better.” As researchers attempt to parse out why and how animal-assisted therapy works on the human brain, debate continues about if pets should be considered a valid healthcare treatment or disability issue.

The connection between pets and oxytocin

One lab result has been consistent: When interacting, humans and their pet dogs both experience increased levels of oxytocin, a “love hormone” that is also triggered by hugging, orgasm, and lactation. Oxytocin helps the brain modulate social concepts, such as empathy, trust, and in-group preference and memory of social cues. The chemical lets you know when you should take comfort in others. It surges when people see their parent or child—sometimes doubling in a parent when reunited with a young child.

It also works cross-species: Dog owners experienced an average oxytocin boost of 6.6 percent after scratching and petting their canine companions, in a 2014 Swedish study that measured the effect in real-time. Canine contact also causes a decrease in levels of cortisol, a hormonal alarm system for stress, in humans.

If spikes in oxytocin reveal how much humans love dogs, they really show how much dogs love humans. Dogs experience a 57-percent increase over baseline levels of oxytocin when playing with their humans.

Oxytocin levels also increase the chances a dog will turn to their human for help. Another Swedish study gave a set of golden retrievers the impossible task of getting a treat in a tightly sealed jar. Some of the dogs got a hit of oxytocin via a nasal spray beforehand. Those dogs tended to approach their owner for help more often, compared to a control group that inhaled a neutral salt water solution. Other dogs given an infusion of oxytocin were more likely to make eye contact with friendly faces in photos and ignore threatening ones, a Finnish study documented. These studies show the brain chemical plays a role in the interplay of affection and receptivity between the two species.

In 2016, a BBC2 documentary ventured into the little-explored area of brain chemicals in pet cats, hiring a lab to compare oxytocin changes in both species when cats interact with people. While the chemical did increase in the felines, the change was much less than it was in canines (a result that should surprise no one who has interacted with both species). Oxytocin increased by an average of 57 percent in dogs when playing with their humans, but only by 12 percent in cats. There haven’t been any studies testing the oxytocin effect of humans interacting with cats, and feline-related research is scant compared to studies of the impact of dogs.

The benefits of animal-assisted therapy

If you are looking for evidence that animals make people feel better, particularly when they are distressed, there are seemingly endless examples: Therapy dogs were shown to have reduced anxiety in people hospitalized with depression in Germany and did the same for long-term residents of a senior home in South Africa.

They were also a pacifying presence in a pediatric center, according to a Brazilian study. In patients, the presence of therapy dogs decreased pain, irritation, and stress and other depressive symptoms. Caregivers also felt less anxiety, mental confusion, and tension.

John Hopkins Hospital in Baltimore has allowed therapy dogs into several departments, including the intensive care unit, as a “nonpharmacological intervention.” The hospital has kept up with a shift in critical care—from keeping patients sedated to allowing them to be awake and engaged as soon as possible, says Megan Hosey, a psychologist specializing in rehabilitation at the hospital.

slamming the door behind me as though to shut out the world I let out a long, deep sigh. it felt as though a 50lbs sand bag lay on my chest and as the last wisps of air escaped my lips I hoped to shake the weight of it. but there it settled, making it […]

via Waves of Loneliness — Life Love and coconut oil