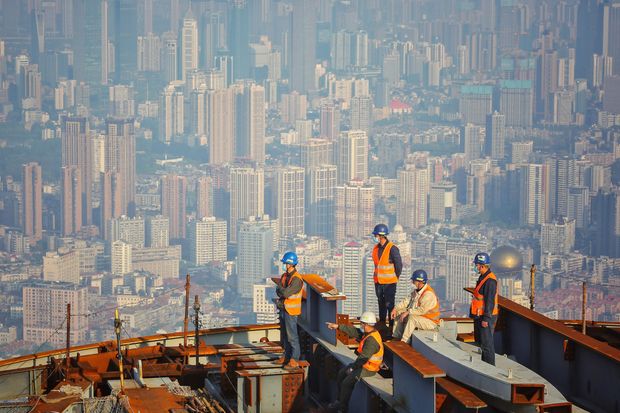 Financial strains among Chinese property developers are hurting the Asian high-yield debt market, where the companies account for a large chunk of bond sales.

That’s widening a gulf with the region’s investment-grade securities, which have been doing well amid continued stimulus support.

Yields for Asia’s speculative-grade dollar bonds rose 41 basis points in the second quarter, according to a Bloomberg Barclays index, versus a 5 basis-point decline for investment-grade debt. They’ve increased for six straight weeks, the longest stretch since 2018, driven by a roughly 150 basis-point increase for Chinese notes.

China’s government has been pursuing a campaign to cut leverage and toughen up its corporate sector. Uncertainty surrounding big Chinese borrowers including China Evergrande Group, the largest issuer of dollar junk bonds in Asia, and investment-grade firm China Huarong Asset Management Co. have also weighed on the broader Asian market for riskier credit.

“Diverging borrowing costs have been mainly driven by waning investor sentiment in the high-yield primary markets, particularly relating to the China real estate sector,” said Conan Tam, head of Asia Pacific debt capital markets at Bank of America. “This is expected to continue until we see a significant sentiment shift here.”

Such a shift would be unlikely to come without a turnaround in views toward the Chinese property industry, which has been leading a record pace in onshore bond defaults this year.

But there have been some more positive signs recently. Evergrande told Bloomberg News that as of June 30 it met one of the “three red lines” imposed to curb debt growth for many sector heavyweights. “By year-end, the reduction in leverage will help bring down borrowing costs” for the industry, said Francis Woo, head of fixed income syndicate Asia ex-Japan at Credit Agricole CIB.

Spreads have been widening for Asian dollar bonds this year while they’ve been narrowing in the U.S. for both high-yield and investment grade amid that country’s economic rebound, said Anne Zhang, co-head of asset class strategy, FICC in Asia at JPMorgan Private Bank. She expects Asia’s underperformance to persist this quarter, led by Chinese credits as investors remain cautious about policies there.

“However, as the relative yield differential between Asia and the U.S. becomes more pronounced there will be demand for yield that could help narrow the gap,” said Zhang.

A handful of issuers mandated on Monday for potential dollar bond deals including Hongkong Land Co., China Modern Dairy Holdings Ltd. and India’s REC Ltd., though there were no debt offerings scheduled to price with U.S. markets closed for the July 4 Independence Day holiday.

The U.S. high-grade corporate bond market turned quiet at the end of last week before the holiday, but with spreads on the notes at their tightest in more than a decade companies have a growing incentive to issue debt over the rest of the summer rather than waiting until later this year.

Sales of ethical bonds in Europe have surged past 250 billion euros ($296 billion) this year, smashing previous full-year records. The booming market for environmental, social and governance debt attracted issuers including the European Union, Repsol SA and Kellogg Co. in the first half of 2021.

The Chinese property bubble was a real estate bubble in residential and/or commercial real estate in China. The phenomenon has seen average housing prices in the country triple from 2005 to 2009, possibly driven by both government policies and Chinese cultural attitudes.

Tianjin High price-to-income and price-to-rent ratios for property and the high number of unoccupied residential and commercial units have been held up as evidence of a bubble. Critics of the bubble theory point to China’s relatively conservative mortgage lending standards and trends of increasing urbanization and rising incomes as proof that property prices can remain supported.

The growth of the housing bubble ended in late 2011 when housing prices began to fall, following policies responding to complaints that members of the middle-class were unable to afford homes in large cities. The deflation of the property bubble is seen as one of the primary causes for China’s declining economic growth in 2012.

2011 estimates by property analysts state that there are some 64 million empty properties and apartments in China and that housing development in China is massively oversupplied and overvalued, and is a bubble waiting to burst with serious consequences in the future. The BBC cites Ordos in Inner Mongolia as the largest ghost town in China, full of empty shopping malls and apartment complexes. A large, and largely uninhabited, urban real estate development has been constructed 25 km from Dongsheng District in the Kangbashi New Area. Intended to house a million people, it remains largely uninhabited.

Intended to have 300,000 residents by 2010, government figures stated it had 28,000. In Beijing residential rent prices rose 32% between 2001 and 2003; the overall inflation rate in China was 16% over the same period (Huang, 2003). To avoid sinking into the economic downturn, in 2008, the Chinese government immediately altered China’s monetary policy from a conservative stance to a progressive attitude by means of suddenly increasing the money supply and largely relaxing credit conditions.

Under such circumstances, the main concern is whether this expansionary monetary policy has acted to simulate the property bubble (Chiang, 2016). Land supply has a significant impact on house price fluctuations while demand factors such as user costs, income and residential mortgage loan have greater influences.