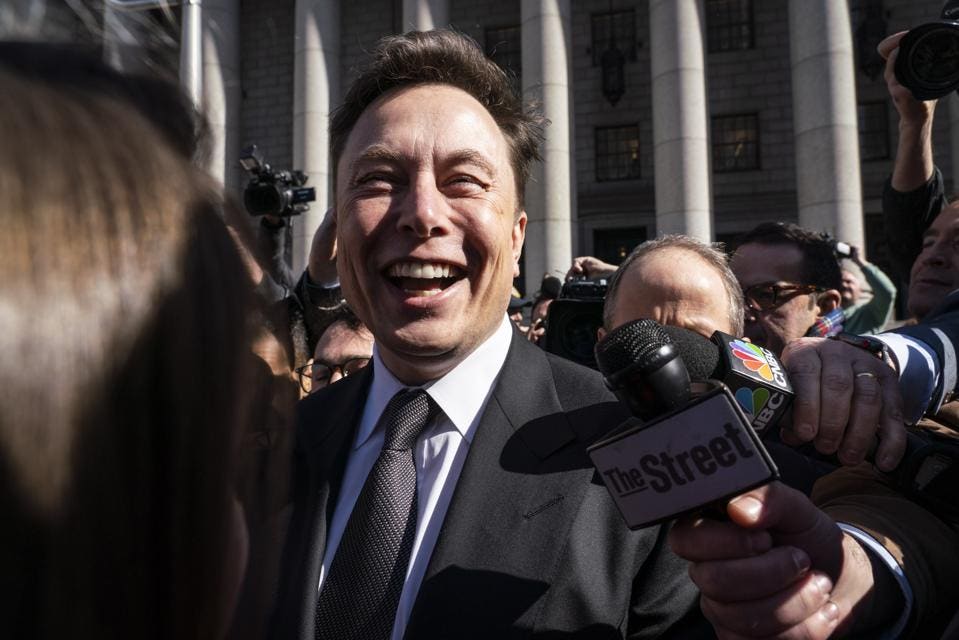 Elon Musk smiles while speaking to members of the media outside federal court in New York, U.S., on April 4, 2019. (Natan Dvir/Bloomberg)

Will Tesla chief Elon Musk finally bring his much sought after electric cars to India within a year?

That’s what he said while speaking with a team of students from the Indian Institute of Technology, Madras, who were competing in the SpaceX Hyperloop Pod Competition 2019. Suyash Singh, who was taking part in the hyperloop competition with a team called Avishkar, confirmed the comments by Musk through email.

But Musk has said this before, as recently as March this year.

In response to a question on Twitter on when he would bring Tesla to India, he wrote, “Would love to be there this year. If not, definitely next! [heart] India.”

The dangling started in April 2016 when Musk tweeted that India was being added to list of countries where Tesla’s relatively affordable Model 3 would be available. Although its price tag of $35,000 made it out of the reach of most Indians, that didn’t tamp any of the excitement around the idea. At the time Musk also said the company would also bring a “India-wide Supercharger network.” Tesla owners in the U.S. can juice up the depleted batteries of their cars in 75 minutes on a supercharger.

But that soon hit a road bump of prohibitive Indian rules. “Maybe I’m misinformed,” Musk tweeted, “but I was told that 30% of parts must be locally sourced and the supply doesn’t yet exist in India to support that.”

Last year he wrote: “Would love to be in India. Some challenging government regulations, unfortunately. Deepak Ahuja, our CFO, is from India. Tesla will be there as soon as he believes we should.” But then the company announced in January that Ahuja would be resigning from his role.

While it’s anyone’s guess on when Tesla will actually be available for sale in India, if ever, the country’s electric vehicle market is slowly picking up steam. New Delhi has a target that 30% of vehicles sold across all segments will be electric by 2030.

The nascent industry got a boost last week when ride hailing giant Uber announced it intends to launch electric autorickshaws in several cities in the coming months for which it has partnered with battery maker SUN Mobility, a joint venture between solar power company SUN New Energy System and electric mobility company Virya Mobility 5.0.

New Delhi has laid out $1.4 billion in subsidies over three years for electric buses, three-wheelers, four-wheelers that are registered as commercial vehicles as well as private motorbikes and scooters. The majority of Indians still travel by those modes rather than personal cars. It also plans to order Uber and its homegrown competitor Ola to convert 40% of their respective fleets to electric by 2026.

CRISIL Research expects a gradual pick-up in EV adoption in India to be led by three-wheelers and two-wheelers over the next five years.

However, for a real pick up in the sector, the country needs to beef up its charging infrastructure, says Hetal Gandhi, Director, CRISIL Research. India had only 352 publicly accessible chargers in 2018 in comparison to the 275,000 chargers in China, according to International Energy Agency. “Greater availability of charging infrastructure would aid in electrification of buses and taxis,” said Gandhi.

That apart, local manufacturing and assembly of battery packs for the EVs would also go a long way in reducing the cost of these vehicles, she added.

Should those actually kick in, it might make the market attractive enough for Musk to actually make good on those tweets.

I write about business and development in the Subcontinent. In the past I’ve worked at AFP, The Wall Street Journal, Mint, Forbes Magazine and Reuters. You can find me on Twitter: @mbahree or contact me on email: Megha.Bahree@gmail.com.

Source: Elon Musk And The Mirage Of Tesla In India