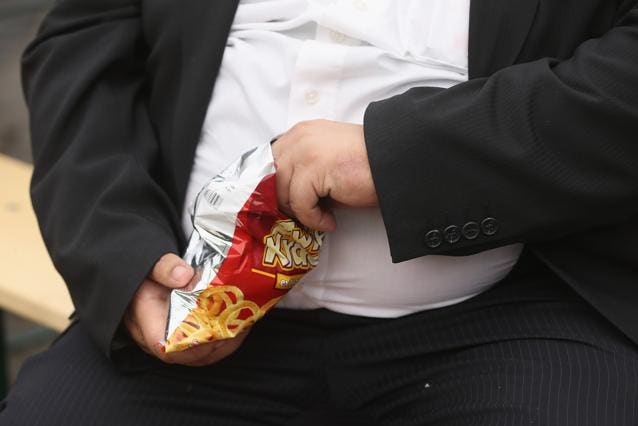 In a fascinating and scorching editorial in the British Journal of Sports Medicine, three authors argue that the myth that exercise is the key to weight loss – and to health – is erroneous and pervasive, and that it must end. The evidence that diet matters more than exercise is now overwhelming, they write, and has got to be heeded: We can exercise to the moon and back but still be fat for all the sugar and carbs we consume. And perhaps even more jarring is that we can be a normal weight and exercise, and still be unhealthy if we’re eating poorly. So, they say, we need a basic reboot of our understanding of health, which has to involve the food industry’s powerful PR “machinery,” since that was part of the problem to begin with.

The major point the team makes – which they say the public doesn’t really understand – is that exercise in and of itself doesn’t really lead to weight loss. It may lead to a number of excellent health effects, but weight loss – if you’re not also restricting calories – isn’t one of them. “Regular physical activity reduces the risk of developing cardiovascular disease, type 2 diabetes, dementia and some cancers by at least 30%,” they write. “However, physical activity does not promote weight loss.”

Plus, in the last 30 years, exercise has stayed about the same, while overweight and obesity have skyrocketed. So something else must be at play – like the type of food we’re eating. That part has gotten steadily worse over the years, as highly-processed sugary foods and sodas have taken over as our go-to choices. “According to the Lancet global burden of disease reports,” they write, “poor diet now generates more disease than physical inactivity, alcohol and smoking combined.” This is a disturbing statistic. But it gets worse.

The related and larger issue is that even normal weight people who exercise will, if they eat poorly, have metabolic markers that put them at very high risk of chronic illness and early mortality. “Up to 40% of those with a normal body mass index will harbour metabolic abnormalities typically associated with obesity, which include hypertension, dyslipidaemia, non-alcoholic fatty liver disease and cardiovascular disease.”

And the crux of the issue is this: We’re continually “fed” the idea that all that’s behind the rise in obesity is lack of exercise, or sedentariness. There have certainly been a lot of studies and popular articles suggesting that sitting is our downfall. Instead of effective messages about diet and health that science actually knows to be true, “members of the public are drowned by an unhelpful message about maintaining a ‘healthy weight’ through calorie counting,” the team writes, “and many still wrongly believe that obesity is entirely due to lack of exercise. This false perception is rooted in the Food Industry’s Public Relations machinery, which uses tactics chillingly similar to those of big tobacco.”

What we know to be true is much simpler: “Sugar calories promote fat storage and hunger,” the write. “Fat calories induce fullness or satiation.” For every additional 150 calories in sugar (i.e., a can of soda) a person consumes per day, the risk for diabetes rises 11-fold, regardless of how much or little we exercise. The single most effective thing people can do for their weight, they write, is to restrict calories – and even more, restrict carbohydrates.

So if this is all true, and research seems to suggest it is, how will it change? It might take quite a lot of work to shift our psychology around food, especially since advertising is so saturated with the message that carbohydrates are good for us. The celebrity endorsements might need to be tweaked, the authors say, and certainly the way foods are advertised and, perhaps, created, need to be shifted. The public should be repeatedly hit with the message that whole, natural foods, where possible and affordable is the best way to go. If you’re trying to lose weight, reduce your calories (especially sugars) – don’t think exercise alone will cut it. And even if you’re normal weight, you can’t subside solely on junk and stay healthy.

The authors end with this powerful finale: “It is time to wind back the harms caused by the junk food industry’s Public Relations machinery. Let us bust the myth of physical inactivity and obesity. You cannot outrun a bad diet.”

I fell into writing about health shortly after grad school, where I realized I didn’t want to work in a lab for the rest of my life! My main areas of interest are the br…

Source: Exercise Can’t Save Us: Our Sugar Intake Is The Real Culprit, Say Experts