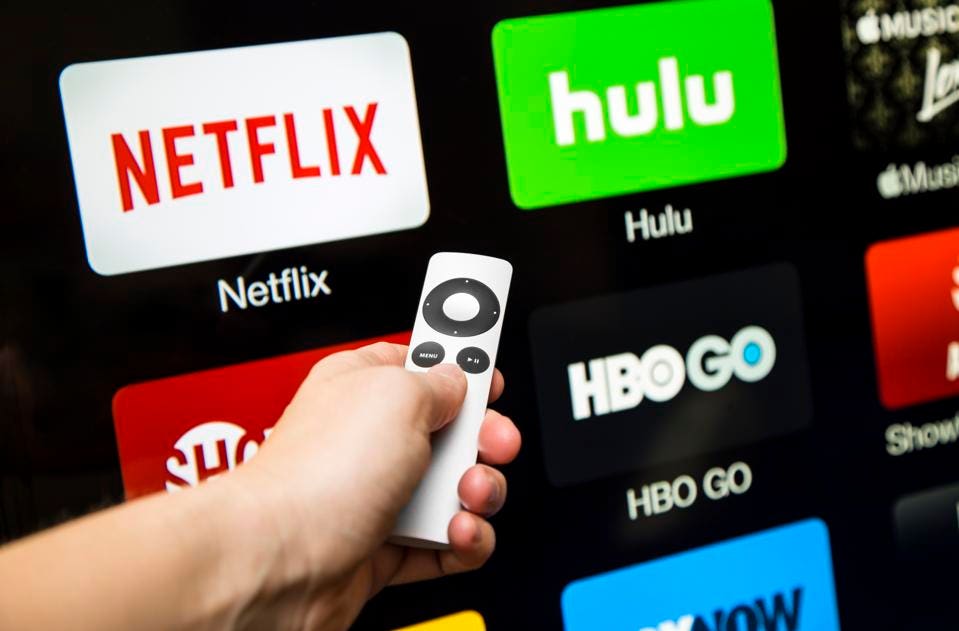 So is Netflix the Napster of streaming entertainment? Remember Napster? It allowed fans to download music for free, and illicitly. Apple helped smash the upstart by launching iTunes, which allowed people to download songs legally, cheaply and easily.

The theme music around video streaming company Netflix is ominous of late. After some unwelcome news, Netflix stock is down almost 10%. Well, it’s about time.

The company has been an investor darling for a long while. Too long, in fact. Yes, Netflix has turned out great original programming (starting with “House of Cards”) and shown some fine films and beloved TV reruns. But the recent potholes it has hit reveal the unpleasant truth: The stock is way overvalued.

Netflix’s scorching growth rate was responsible for putting it into the same exalted tier as its tech betters.  The streaming outfit belonged among the other members of the FAANG group as much as a scrappy 5-6 junior varsity point guard would among 6-10 NBA superstars.

Despite the inflated stock price, Netflix’s market cap still is dwarfed by the tech titans’ value: $142 billion versus $573 billion for Facebook, $973 billion for Amazon, $946 billion for Apple and $795 billion for Google parent Alphabet.

In revenue terms, the contrast is as stark. Netflix garnered just under $16 billion last year. At the same time, the other four’s revenue ranged from Apple’s $266 billion down to Facebook’s $57 billion. Netflix’s sales look puny in comparison.

But then check out their trailing price/earnings ratios. Netflix sports a towering 127 P/E. Amazon has the largest multiple, with 82. The rest are higher than the S&P 500 yet hardly stratospheric, with Facebook at 30, Apple at 17 and Alphabet at 29.

How in the name of Benjamin Graham and the other investing gods does Netflix deserve such a towering P/E, far in excess of the Big Tech quartet’s? Maybe the stock’s current downdraft is the start of a long-overdue reckoning.

Netflix’s stock slide started last week when the company announced it had lost the rights to two of its top-watched shows, reruns of “The Office” and “Friends.” AT&T subsidiary WarnerMedia has the rights to “Friends,” which it can put on its HBO Max, while Comcast-owned NBC Universal will play “The Office” on its planned streaming service. Meanwhile, Netflix is burning through cash at an unsustainable pace of $3.5 billion this year.

Then came a second groin kick, during Netflix’s second quarter earnings release Wednesday: Subscriber numbers came in weaker than expected—the company added just 2.7 million paid subscribers, down from its own projection of 5 million. Not helping was its recent price hike, which surely had a role in tempering the growth rate. In the U.S., it saw 130,00 subscribers quit.

That’s why a lot of people are wondering whether Netflix is the next Napster, a disruptive business that paved the way for others but could not last itself. Among them is the ever-thoughtful Stephen Paternot, CEO of Slated, the online film financing marketplace and a streaming expert.

“Netflix is learning the hard way what old school studios have known for a long time: to be competitive and cash-efficient, you’ll need to build a solid library of original content with fewer, bigger projects,” he said in a statement. “Everyone is moving to the subscription model, so start finding—and owning—those blockbuster projects and binge-worthy shows if you want to stay afloat.”

Certainly, on one level, the comparison to Napster is strained. The now-defunct music company’s dubious business, based on swiping copyrighted content, is nothing like Netflix’s subscription model. Napster was sued out of existence. The broader question is: Will Netflix end up in the graveyard as others pass it by? Probably not.

Netflix still has a lot going for it. When the third season of its hit “Stranger Things” landed recently, the viewership was huge. Expect a similar result when the latest (and final) season of “Orange Is the New Black” drops net week. True, some big dogs are getting into its arena. But joining Netflix for viewer, unlike buying its stock, isn’t that expensive, and certainly is less than cable: $12.99 monthly for its most popular plan.

All of which is to say that Netflix has likely carved out a place for itself in the video landscape. It just doesn’t belong in the lofty company of Facebook, Amazon, Apple and Google. And the stock drop may be the market’s waking up to this reality.

Good investing ideas, often contrarian, constitute my brief, here at Forbes. com. Key to that is helping you to build a solid financial future.