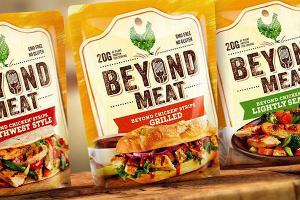 Impossible Foods, which provides restaurants with plant-based meat, took a key step toward challenging rival Beyond Meat (BYND)  for shelf space at the grocery store.

Download Now: To be a profitable investor you first need to know the rules. Get Jim Cramer’s 25 Rules for Investing Special Report

The move gives the Redwood City, Calif., company access to OSI’s network of more than 65 facilities in 17 countries.

Impossible said it also has tripled its weekly production at its manufacturing plant in Oakland.

“We conducted an exhaustive due diligence process to determine how to scale our manufacturing, both in the short term and over the next several years, and we were thoroughly impressed with OSI’s commitment to quality and responsiveness,” Sheetal Shah, senior vice president of product and operations at Impossible Foods, said in a statement.

Separately, Impossible also received regulatory clearance from the U.S. Food and Drug Administration to use soy leghemoglobin as a safe food-color additive in its imitation beef, which gives the alternative its signature bloody look.

Beyond Meat, El Segundo, Calif., at the beginning of May went public at $25 a share. Holders have had a bumpy ride up: The shares have traded as low as $45 and as high as nearly $240.

Amid the Impossible Foods reports, Beyond Meat shares are trading Wednesday up 3.2% to $200.98 on Wednesday.

Impossible Foods in May raised $300 million in a funding round, a step toward a potential initial public offering.