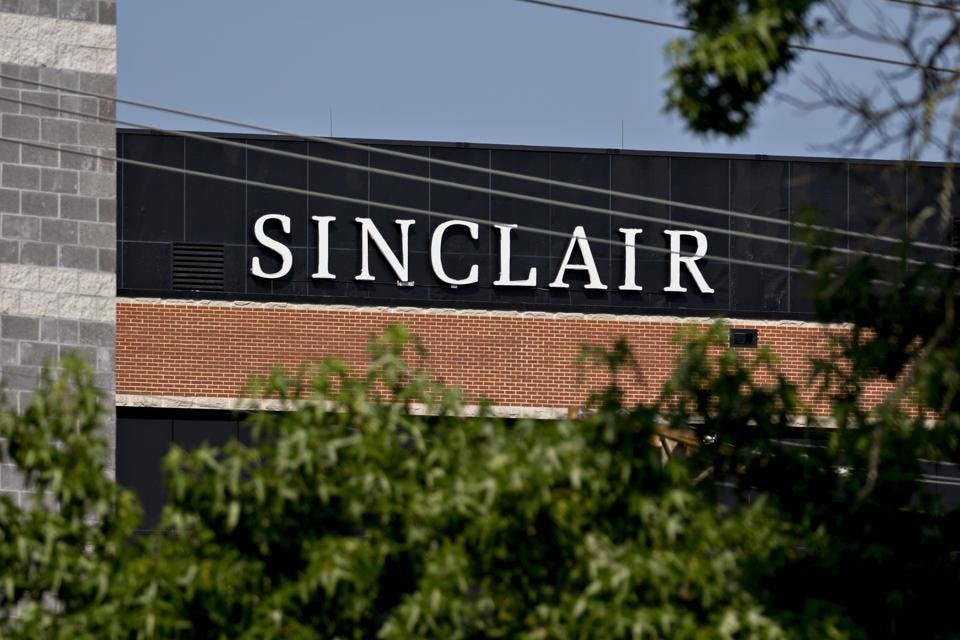 Investors were loving Sinclair Broadcast Group’s big bet on the future of sports, and sports gambling, sending the company’s stock up 30% in early trading on Monday.

The deal, announced Friday afternoon, would see Sinclair and partner Byron Allen of Entertainment Studios pay Disney $10.6 billion for 21 regional sports networks around the country. Shares shot up in early trading by more than $13 a share, to as much as $58.84.

Federal regulators forced Disney to divest the sports networks as part of completing its $71.6 billion acquisition of most of 21st Century Fox.

Previously, Sinclair joined with the New York Yankees and Amazon in the $3.5 billion acquisition of a 22nd RSN, the YES Network in New York. Sinclair also partnered with the Cubs baseball team to launch Marquee Sports Network in Chicago. That channel will launch in 2020.

It’s a big bet, part of a big transformation for Sinclair, which last summer was stunned when regulators blocked its $3.9 billion acquisition of Tribune Media. Sinclair, with about 200 stations under its control, would have had too large a share of the broadcast sector, regulators ruled.

At year’s end, rival station group Nexstar offered more than $6 billion for Tribune in a deal that looks likely to gain approval.

But the sports deals mark a major new direction for Sinclair. It marks a major bet on the likelihood that sports gambling soon will be widely legal across the United States, and hugely lucrative for those outlets that possess access to game and game information, as well as technology for easily betting on those games.

“This acquisition is an extraordinary opportunity to diversify Sinclair’s content sources and revenue streams with high-quality assets that are driving live viewing,” Ripley said in announcing the deal. “We also see this as an opportunity to realize cross-promotional collaboration, and synergistic benefits related to programming and production.”

A U.S. Supreme Court decision has cleared the way for state-by-state legalization of gambling in the United States. New Jersey and a handful of other states already have jumped in, reaping big paydays so far.

The main holdup for further gambling expansion likely will be efforts by the major sports leagues, led by the NBA, to get a cut of the take. They’re pushing provisions in legalization bills for so-called “integrity fees.”

Those issues will almost certainly get worked out, given projections that legalized gambling across most of the U.S. could generate tens of billions of dollars.

And that’s what Sinclair is betting on with the RSN acquisitions. Ripley told Reuters on Sunday that his company would be open to licensing some of the sports content it acquired in the deal to outlets such as Amazon, Disney and AT&T as those companies jostle for position in the increasingly competitive online-streaming space.

“There is only going to be more competition and more interest for key assets like this in the future,” Ripley said. “We have an interest in as broad a distribution as possible.”

Ripley called the RSN deal a bargain. The price is certainly far below the estimates of $15 billion to $20 billion that most analysts had predicted for the portfolio. But the networks could be valuable for multiple reasons.

For instance, the company expects to profit from advertising about gambling, Ripley said.

He estimated industrywide, some $1.5 billion to $2 billion in new revenue would come in from sports book operators and other companies in the space.

Given broadcast advertising’s cyclical nature – it yo-yos up and down on election-year and Olympics/World Cup spending – that could be a big deal, especially because other ad revenues have been flat or slightly down in recent years.

Sinclair already owns The Tennis Channel, which holds rights to many of the major tennis tournaments held around the world.

And sports of all kinds – already a sticky, lucrative programming option given the willingness of fans to pay for access – is about to become even more lucrative with the increasing legalization of gambling.

As Sinclair CEO Christopher Ripley told me a few months ago, tennis is already the second-most wagered-upon sport in Europe, where gambling is widely legal. Soccer, of course, is No. 1.

Most of the tennis gambling “handle,” or amounts wagered, comes from in-game “prop” bets (who will win the next game or set, or how many aces will a player serve) rather than overall match outcomes, Ripley said.

The company already is working on technology that could be used to power in-game betting on its broadcasts, Ripley said.

Tennis, with its numerous breaks and game-match-set structure, is ideal for lots of prop bets. But many popular American sports, most notably football and baseball, but even more fluid and fast-paced sports such as basketball, can also become a lucrative source of legal betting.

The deal also could boost Sinclair’s recently launched STIRR online service, which features local news and sports content from its broadcast stations that cover about 40 percent of the country. That Sinclair-owned content is woven in with entertainment and news content from about 30 partners in an ad-supported service. Initial viewership results for STIRR have reportedly been well above internal projections, but the company has not released any details.

Adding the RSN content to STIRR’s offerings, either directly as Viacom is doing on new acquisition Pluto.TV with limited versions of its cable properties, or as a premium upsell, could further boost STIRR.

Sinclair also has been a big proponent of ATSC 3.0, the new broadcast technology now being rolled out around the country. Among other capabilities, ATSC 3.0 will allow broadcast groups to provide addressable, targeted advertising to viewers, and to offer new channels and data services within the same bandwidth they’re now using to broadcast their main signal.

It’s easy to imagine those potential data services including sports-related information tied to the RSN networks’ teams, as well as gambling information.

STIRR’s focus on local news and sports represents a half-step toward an ATSC 3.0 future, but relies on widely available Internet-based technology.

ATSC 3.0 itself is not expected to have a substantial impact until at least 2021 because of the challenges of both broadcaster rollout and consumer adoption of newly capable TVs, external streaming boxes and even mobile devices.

Thanks for reading! Follow me on Forbes and the socials, and subscribe to my Bloom in Tech podcast on iTunes, Spotify, Overcast, Anchor.fm, SoundCloud and more.

I’m a Los Angeles-based columnist, consultant, speaker, podcaster and consultant focused on the collision of tech, media and entertainment.