At the start of October, Apple was riding high following the launch of the iPhone, new online services were opening for business, and a number of new products were hiding in plain sight ready for a launch before Christmas. There was also every expectation that these products would be boosted by a second event in October. Well, it’s the end of October, and there hasn’t been an event.

It looks like Apple has decided that October’s second-line product launches are not going to get the exposure and the oxygen of a staged event. AirTags are still waiting to be activated, the AirPods Pro were launched by press release yesterday, and the iPad Pro has been deemed ‘good enough’ to get through the holiday season before a potential update in March 2020.

And a triumphant return of a large-screened MacBook Pro in front of the gathered excitement of the geekerati has been denied. Once it was a powerful statement of computing power and prestige, now it’s a tool to help sell more iPhones and subscriptions.

The update to the 16-inch MacBook Pro has been trailed throughout the year. Expectations have been rising from reports at the start of the year on Apple’s portfolio, through movement in the supply chain,  to the leaks that suggested production had started on the units earlier this month.

There is even evidence of the new laptop tucked away in a beta of MacOS Catalina with a nod towards the 16-inch form factor in the system icons. And let’s not forget the AirPods Pro. They require MacOS 10.15.1, and the eagle eyed will note that, as the digital presses roll on this editorial, MacOS 10.15.1 is to yet available to the public.

The new laptop would fill the void left behind by the loss of the 17-inch MacBook Pro in 2012, would reinvigorate Apple’s laptop range, bring back a physical escape key, and fix the embarrassment of the butterfly keyboard once and for all. 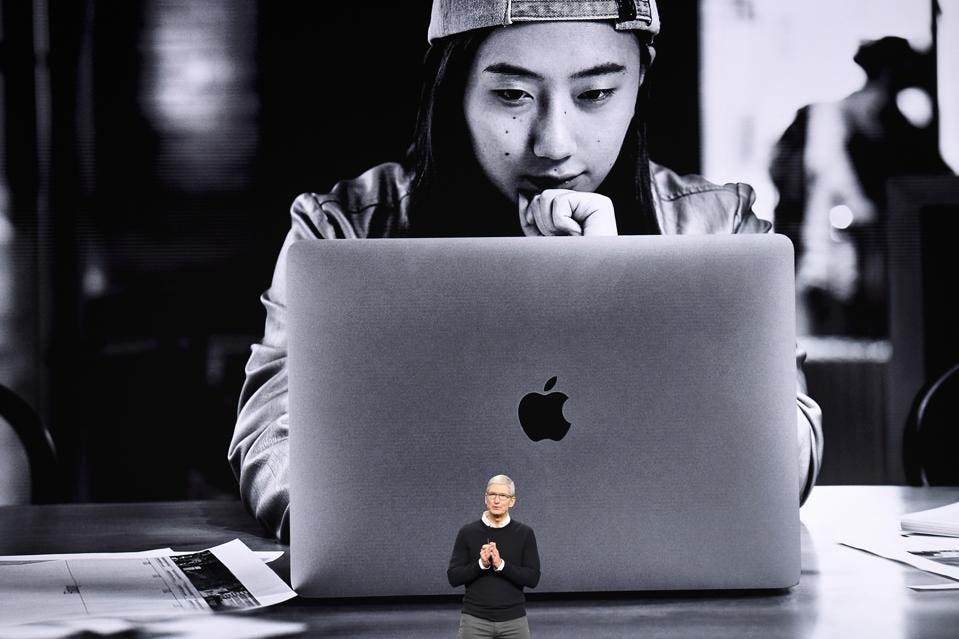 Tim Cook, chief executive officer of Apple Inc., speaks during an event at the Steve Jobs Theater in… [+]

Everything was there except the drive and determination to push the Mac as a platform in general and the MacBook Pro specifically.

So yes, dear faithful geekerati. Go and buy the new MacBook Pro when it arrives. Go and develop your apps for iOS and iPadOS on it. Go and edit the films and TV series for Apple TV+, the games for Apple Arcade , the podcasts for (er) Podcasts… but don’t expect the genre-defining MacBook Pro to get any public recognition from Tim Cook.

Now read more about the first release of MacOS Catalina, and if you should upgrade…

I am known for my strong views on mobile technology, online media, and the effect this has on the public conscious and existing businesses. I’ve been following this space for over fifteen years, working with a number of publishers, publications and media companies. As Scotland’s first podcaster, I continue to be a prominent voice in the rise of podcasting and new media online, and received a British Academy (BAFTA) nomination for my annual coverage of the Edinburgh Festival Fringe. You’ll find me on Twitter (@Ewan), Facebook, and at my own site.

Unbox Therapy
15.6M subscribers
After many years using MacBook variants I’ve made the switch to Windows. I’ve used every version of MacBook Pro and MacBook Air that have been released. My current laptop of choice is the Lenovo Thinkpad X1 Carbon / Lenovo Thinkpad X1 Extreme.Turns out switching from Mac to Windows isn’t as painful as I expected. FOLLOW ME IN THESE PLACES FOR UPDATES Twitter – http://twitter.com/unboxtherapy Facebook – http://facebook.com/lewis.hilsenteger Instagram – http://instagram.com/unboxtherapy