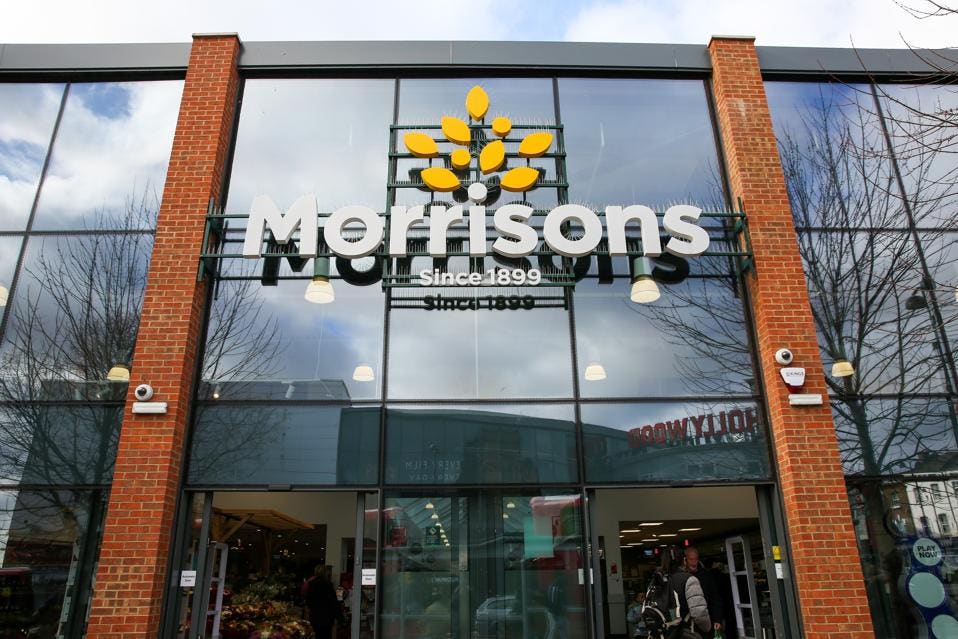 The huge spike in its valuation was prompted by emerging news over the weekend that Morrisons had become a takeover target for CD&R, potentially sparking a bidding war for the grocer.

The news prompted shares to rise across the grocery sector, as investors bet that other supermarket groups could become targets for private equity investors or that a bidding battle could erupt, with online giant Amazon AMZN -0.9% – which has an online delivery deal with Morrisons – one possible bidder for its partner.

American private equity firms Lone Star and Apollo Global Management APO +1.9% have also been mentioned as possible suitors for Morrisons, which has been battling with a declining market share, now down at 10%, from 10.6% five years ago. There is a sense that the U.K. supermarket sector could be ripe for more potential takeovers. The share price performance of the entire sector is seen as under-performing compared with U.S. grocers, for example, despite being profitable and achieving typical dividend yields of around 4%.

CD&R has history, having previously made investments in the discount U.K. store chain B&M, from which it made more than $1.4 billion.

Morrisons first announced on Saturday that it had turned down a preliminary bid by Clayton, Dubilier & Rice, which is believed to have been made on or around 14 June. The Bradford-based company said that its board had “unanimously concluded that the conditional proposal significantly undervalued Morrisons and its future prospects”.

CD&R had offered to pay nearly 320c a share in cash, while Morrisons’ share price closed at 247c on Friday, before its surge today as trading reopened for the first time since the announcement.

The New York-headquartered private equity firm has until 17 July to make a firm offer and to persuade a reluctant Morrisons management team to recommend that shareholders agree to the deal.

Sir Terry Leahy, a former Tesco chief executive, is a senior adviser for CD&R and, like its market-leading rival Tesco, Morrisons’ shares have been trading below their pre-pandemic levels as higher costs due to operating throughout the pandemic have taken their toll despite booming sales at essential stores across the U.K.

Morrisons currently employs 121,000 people and made a pre-pandemic profit of $565.5 million in 2019, which plunged to $278.6 million in 2020. It owns the freehold for 85% of its 497 stores. One-quarter of what it sells comes from its own supply chain of fresh food manufacturers, bakeries and farms.

CD&R has so far declined to comment on whether it will return with a higher bid, but analysts believe its approach is probably just the first salvo.

Previously, former Walmart WMT +0.9%-owned Asda was snapped up by the U.K.’s forecourt billionaire Issa brothers along with private equity firm TDR Capital in a debt-based $9.4 billion buyout. Likewise, CD&R could adopt a similar model and combine Morrisons, which has just a handful of convenience stores after a number of limited trials of smaller store formats, with its Motor Fuel Group of 900 gas stations.

There are also wider political concerns that it could emulate the Issas by saddling Morrisons with debt and selling off its real estate assets and CD&R is understood to be weighing political reaction before determining whether or not to come back with a higher bid.

For tightly-regulated U.K. competition reasons, takeovers or mergers between supermarket groups appear increasingly complex. The competition watchdog blocked a proposed $9.7 billion takeover by Sainsbury’s for rival Asda two years ago, determining that the deal threatened to increase prices and reduce choice and quality.

However, comparatively relaxed rules on private equity bids mean few such restrictions apply to takeovers. Private equity firms have acquired more U.K. firms over the past 18 months than at any time since the financial crisis, according to data from Dealogic, and Czech business mogul Daniel Křetínský has established a 10% stake in Sainsbury’s, the U.K.’s second biggest supermarket chain. Having failed in an attempt to take over Germany’s Metro Group last year, he could yet make an offer for a British grocer.

“Morrisons’ balance sheet has plenty of asset backing and the valuation was relatively depressed before news of private equity interest,” he said. “The market value of the business had weakened so much that it clearly triggered some alerts in the private equity space to say the value on offer was looking much more attractive.”

I am a global retail and real estate expert who looks behind the headlines to figure out what makes consumers tick. I work as editor-in-chief for MAPIC and editor for World Retail Congress, two of the biggest annual international retail business events.  I also organise, speak at, and chair conferences all over the world, with a focus on how people are changing and what that means for the retail, food & beverage, and leisure industries. And it’s complicated! Forget the tired mantra that online killed the store and remember instead that retail has always been dog-eat-dog: star names rise and fall fast, and only retailers that embrace the madness will survive. Don’t think it’s not important, your pension funds own those malls!

In 2005 Morrisons bought part of the old Rathbones Bakeries for £15.5 million which make Rathbones and Morrisons bread. In 2011, Morrisons opened a new 767,500 square/foot centre in Bridgwater for a £11 million redevelopment project. This project also made 200 new jobs.