More Americans than ever are quitting their jobs and moving abroad or retiring overseas — 8.7 million, to be exact, according to State Department figures. And one of the biggest driving factors is the lower cost of living in other countries.

The editors at International Living recently came out with a list of the five best places where a couple can live on under $30,000 a year, or $2,500 a month. And guess what? If you’re single, it’s even cheaper. Take Cambodia, where you can live comfortably for just $1,150 a month. The most expensive place on the list — which spanned from Southeast Asia to Europe to Latin America — came in at just $1,500 a month for a single person.

Why It’s Great: For the third year in a row, affordable and exotic Cambodia claimed the top spot in the cost-of-living category of International Living’s Annual Global Retirement Index. “Cambodia may be far away, but that’s arguably the only downside. This is a place where you can instantly upgrade your lifestyle while you slash your cost of living,” says Jennifer Stevens, executive editor of International Living.

Top Spot: The place to be? Phnom Penh. “French colonial buildings, wide leafy boulevards, gilded pagodas and palaces — it’s beautiful,” says Stevens. “And it’s also a great jumping-off point for exploring the region.” There is a cool local vibe in Phnom Penh, with its vibrant arts community and chic shops. And there’s nothing like going to the street corner in the morning to grab a fresh coconut and a newspaper.

The Cost: While the cost of living in Cambodia may be one of the lowest in the world, the standard of living is high. In Phnom Penh, you can find a one-bedroom, one-bathroom rental apartment with a balcony in the center of the city for a mere $250 per month. Utilities (water, electricity, garbage, cooking gas, drinking water) average around $80 to $100 a month. Dinner at a high-quality international restaurant costs $10 a person. And $200 a month will keep your fridge filled with food, fresh fruit and vegetables. A single person can live here for $1,150 a month — or less. A couple can live well on a monthly budget of $2,000. 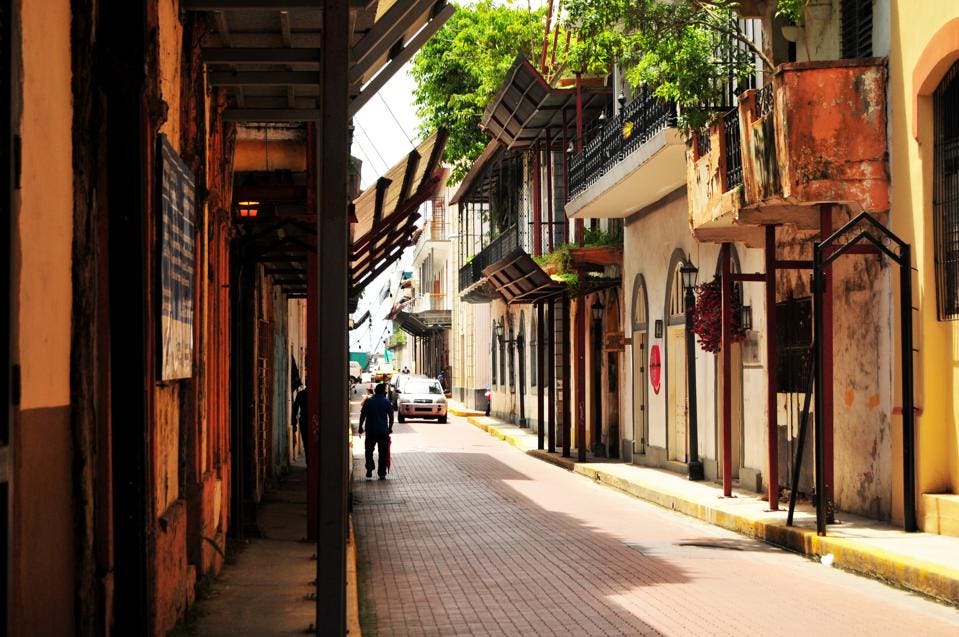 Why It’s Great: Panama draws a thriving international business community as well as expats who are attracted to its cities, beaches and ease of living. The currency is the U.S. dollar, and there are many English speakers, as well as a well-trained medical community. Plus, it’s convenient: The international airport offers direct connections to many other parts of the world. 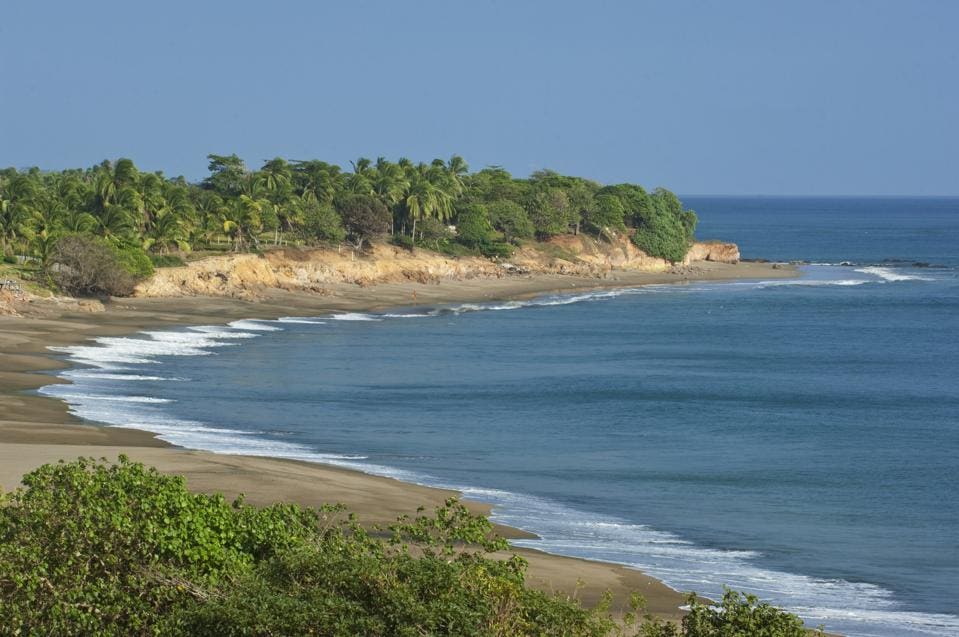 Top Spot: At the tip of the Azuero Peninsula, Pedasí is a small fishing town about a five-hour drive from Panama City.  “For tranquil, rural living and ocean breezes, lazy Pedasí on Panama’s Pacific is worth a visit,” says Stevens. “It’s relatively remote, but the small English-speaking community has a very friendly reputation and for beachside living, you’d be hard-pressed to beat this surf-town’s low prices.” 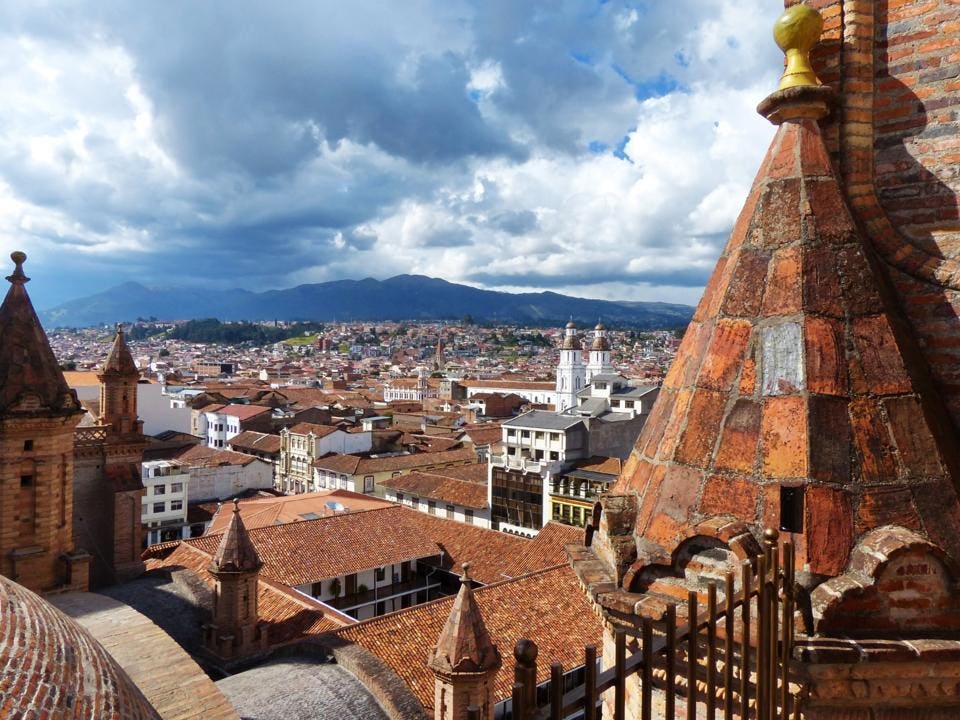 Looking over Cuenca’s UNESCO-protected historical center and its surrounding mountains with a view of the towers of the Santo Domingo Church. (Photo courtesy of Shutterstock)

Why It’s Great: What’s your dream destination? Whether you’re in search of an unspoiled beach town, a bustling city or a quiet mountain village, you’ll find it in Ecuador. Plus, as part of the Land of Eternal Spring, you’ll enjoy good weather year-round. 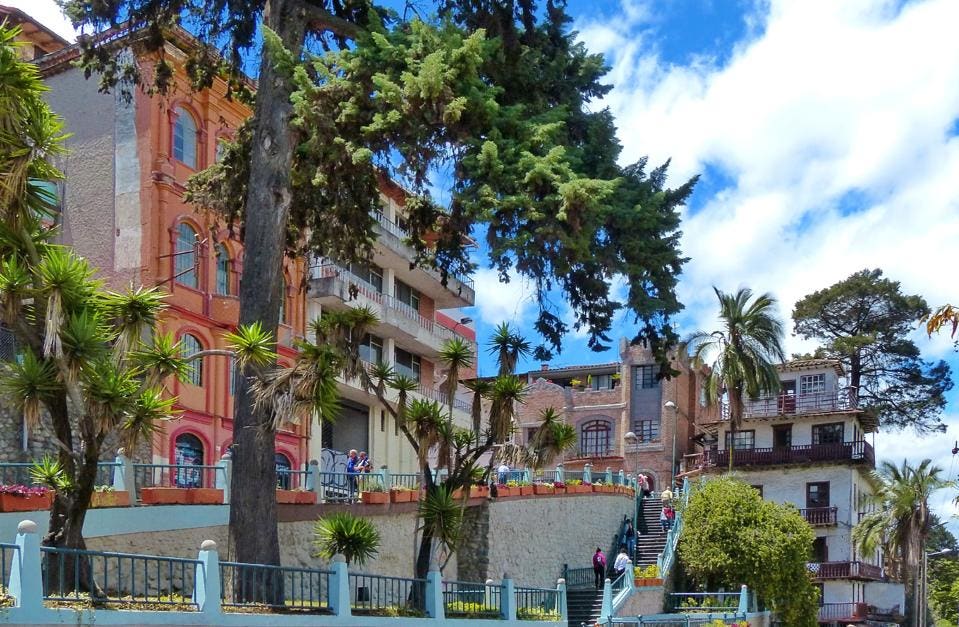 A view of a street in Cuenca, Ecuador. (Photo courtesy of Shutterstock)

Top Spot: Looking for sophisticated living on a budget? You should have the colonial city of Cuenca at the top of your list. Cuenca is Ecuador’s third-largest city and one of the country’s five UNESCO World Heritage Sites. “Cuenca is rich with parks people really use, centuries-old churches, lots of restaurants and a seemingly endless supply of symphony, theater, dance and music offerings — often free,” says Stevens. “You can live right in the heart of the city center and it’s an easy place to get around without a car.”

The Cost: Living in Cuenca costs about 25% of what it costs in some parts of the United States. A single person can live on $1,440 per month, while a couple can expect to spend $1,680 per month, excluding travel. Real estate is affordable. Think: just $500 a month for a two-bedroom, two-bathroom condo in the Puertas del Sol neighborhood. You don’t really need a car here: You can grab a taxi for just $3.50 or take a bus to neighboring cities for just $2. 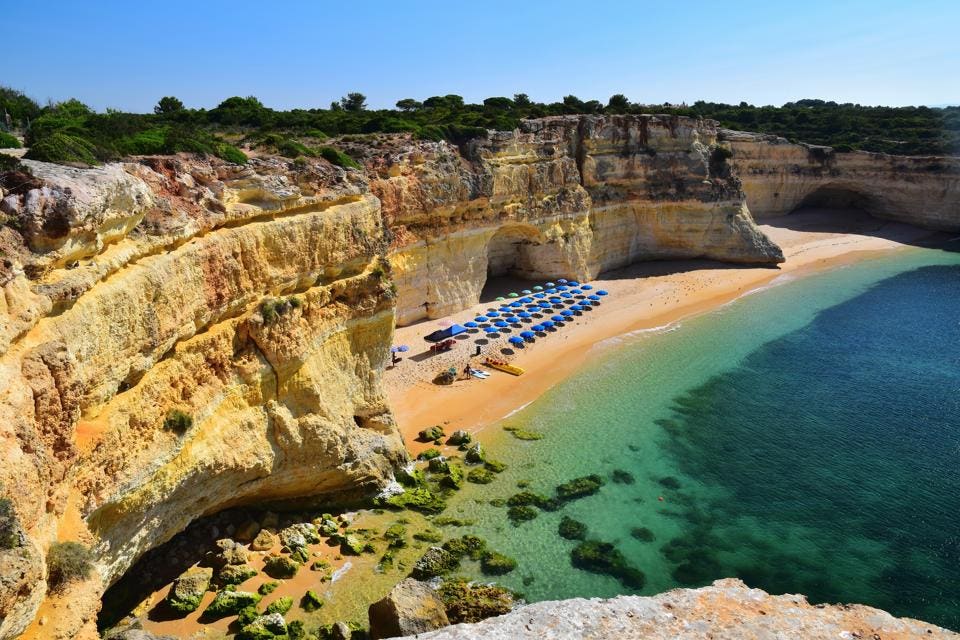 A beautiful coastline with cliffs and sandy beach in Algarve, Portugal. (Photo courtesy of Shutterstock) 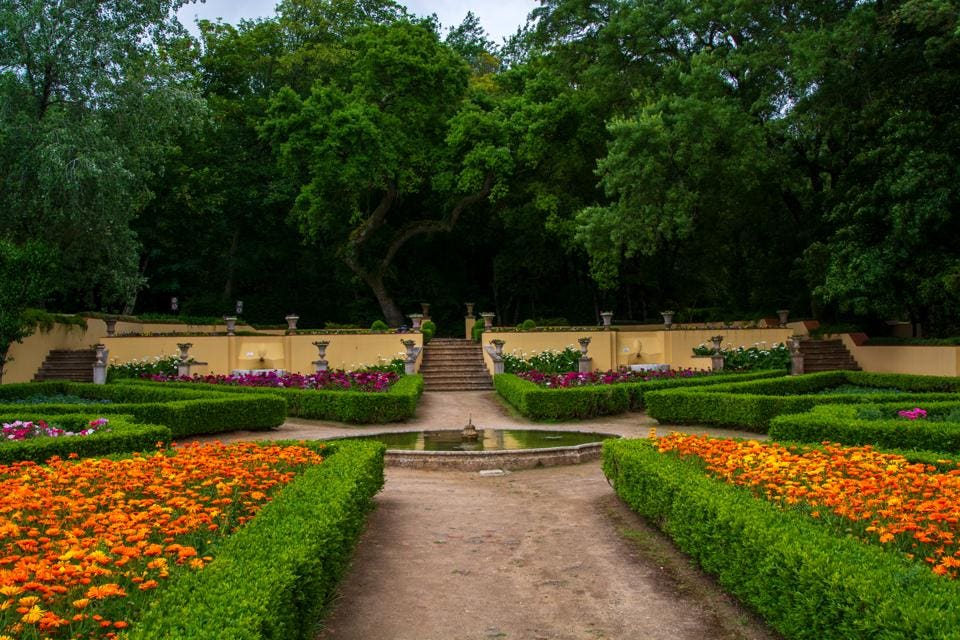 A public garden in Mafra village near Lisbon, Portugal. (Photo courtesy of Shutterstock)

Top Spot: One of the best places to move is low-key Mafra, located 21 miles northwest of Lisbon and 15 minutes from the breathtaking surfing beaches of Ericeira. The village has white-washed houses, narrow cobbled streets, tons of cafés and bars, as well as a wealth of outdoor activities. Next to one of the country’s largest national palaces is a huge park called the Jardim. In the former royal hunting grounds, Tapada de Mafra, you can go hiking and mountain biking.

The Cost: According to International Living, prices are low. You can expect to pay $5 for a fast-food snack, about $7 a person for a meal in a cheap restaurant and $10 in a midrange restaurant. At the grocery store, a half liter bottle of local beer is $1 and a bottle of nice wine is $4. Taxis start at about $4. Rent is attractive, too. A two-story home with four bedrooms, four bathrooms, a four-car garage and a small guest house, all within walking distance of the center of town, can be had for just $1,000 per month. A single’s budget for Mafra is $1,465 a month. A couple can live well in Mafra on a monthly budget of $2,034. 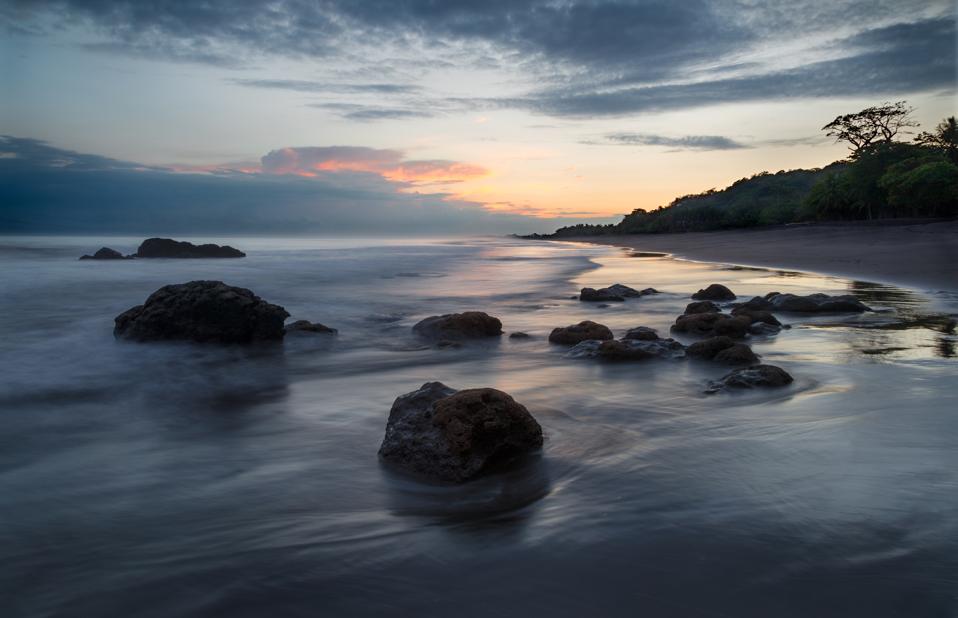 Sunrise on a beach in Costa Rica. (Photo courtesy of Shutterstock)

Why It’s Great: This country won top honors as International Living’s 2018 best place in the world to retire. “Costa Rica is a safe, good-value, beautiful country that offers a wide variety of climates and lifestyles amid what is really a natural wonderland,” says Stevens. 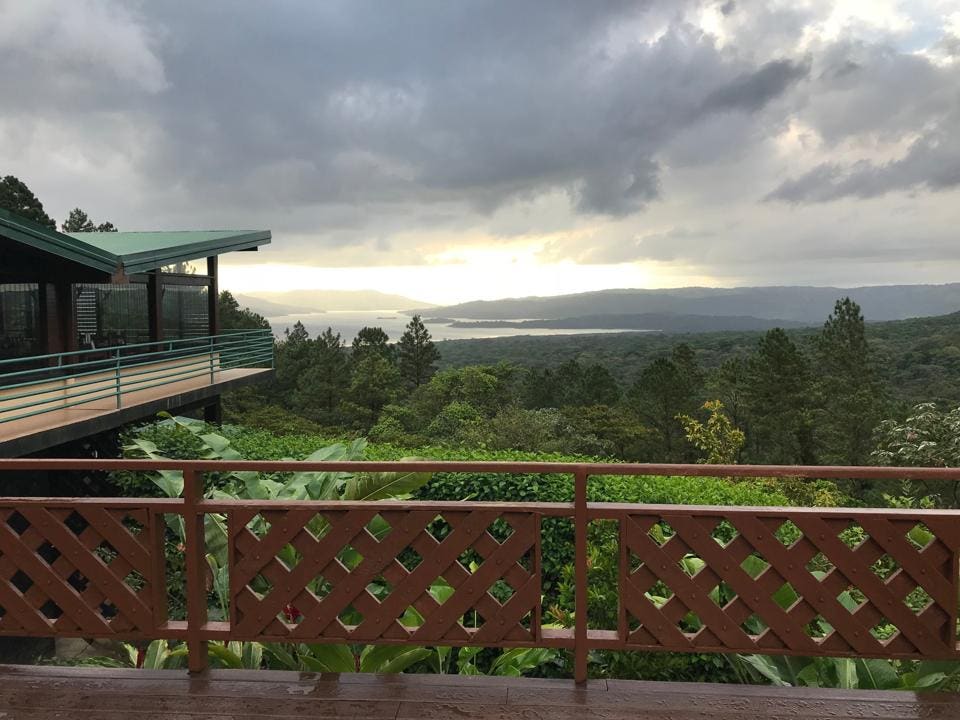 How about a house overlooking Lake Arenal, Costa Rica? (Photo courtesy of Shutterstock)

Top Spot: Where to live? Not far from the capital of San José, Costa Rica’s Central Valley is home to about two-thirds of the country’s population and is a flashback to a simpler era. “Quiet, lushly green, eco-friendly and long a haven for Americans seeking spring-like weather year-round, the villages scattered through Costa Rica’s Central Valley represent excellent bang for your buck,” says Stevens. Some of the most popular towns for foreigners include Grecia, Atenas, San Ramon, Sarchi, Escazu, Santa Ana, Puriscal and Ciudad Colon. Another draw is that expats can live comfortably alongside Costa Ricans. There are safe residential communities, excellent medical facilities, great restaurants and plenty of natural wonders — volcanoes, waterfalls, rivers, forests.

The Cost: A single person can live on as little as $1,500 a month in the Central Valley, though you could get by on considerably less. A couple can live well on $2,000 a month. Also part of its appeal: “The healthcare in Costa Rica is top notch and low priced, and from this area it’s easy to access, too,” says Stevens.