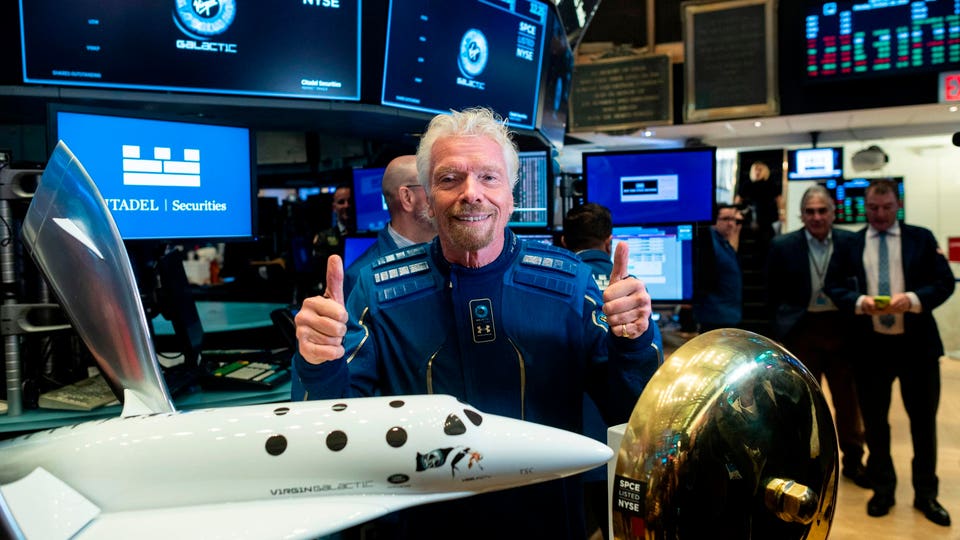 The “billionaire space race” just got a bit more literal Thursday, as Virgin Galactic announced that it would be opening up the flight window for its first fully crewed mission to space on July 11, and that one of its first passengers would be Richard Branson. That’s 9 days prior to Jeff Bezos’ planned launch on July 20 on a capsule from his company Blue Origin.

If everything goes as planned, Branson wouldn’t be the first billionaire to go to space, but he would be the first to go on his own company’s spacecraft. Shares of Virgin Galactic stock soared in after-hours trading, up to over $51 at the time of publication. The stock had closed down at $43.19 on Thursday.

The “Unity 22” mission, as the company has dubbed it, is part of a series of test flights Virgin Galactic is conducting before it opens up its space tourism business to paying customers. The mission’s goal, the company says, is to accomplish several things: first, to evaluate the customer experience, including the periods of weightlessness and views of Earth. Second will be to test aspects of conducting research experiments, another revenue stream for the space. Third is to ensure that the company’s training program adequately prepares customers for the experience.

Joining Branson on the flight are Beth Moses, Virgin’s chief astronaut instructor; Colin Bennett, the company’s lead operations engineer; and Sirisha Bandla, the company’s VP of researcher operations, who will be conducting a science experiment for the University of Florida.

Virgin Galactic was founded by Branson in 2005, and began publicly trading on the New York Stock Exchange in 2019. If July’s flight is successful, the company plans two more test flights evaluating other aspects of the experience before beginning commercial service in 2022.

“It’s one thing to have a dream of making space more accessible to all; it’s another for an incredible team to collectively turn that dream into reality,” Branson said in a statement. “As part of a remarkable crew of mission specialists, I’m honoured to help validate the journey our future astronauts will undertake and ensure we deliver the unique customer experience people expect from Virgin.”

Source: Richard Branson Plans To Get To Space Before Jeff Bezos

Virgin Galactic is not the only corporation pursuing suborbital spacecraft for tourism. Blue Origin is developing suborbital flights with its New Shepard spacecraft. Although initially more secretive about its plans, Jeff Bezos has said the company is developing a spacecraft that would take off and land vertically and carry three or more astronauts to the edge of space.

On 16 September 2014, SpaceX and Boeing were awarded contracts as part of NASA’s CCtCap program to develop their Crew Dragon and CST-100 Starliner spacecraft, respectively. Both are capsule designs to bring crew to orbit, a different commercial market than that addressed by Virgin Galactic.

Now-defunct XCOR Aerospace had also worked on rocket-powered aircraft during many of the years that Virgin Galactic had; XCOR’s Lynx suborbital vehicle was under development for more than a decade, and its predecessor, the XCOR EZ-Rocket experimental rocket powered airplane did actually take flight, but the company closed its doors in 2017.