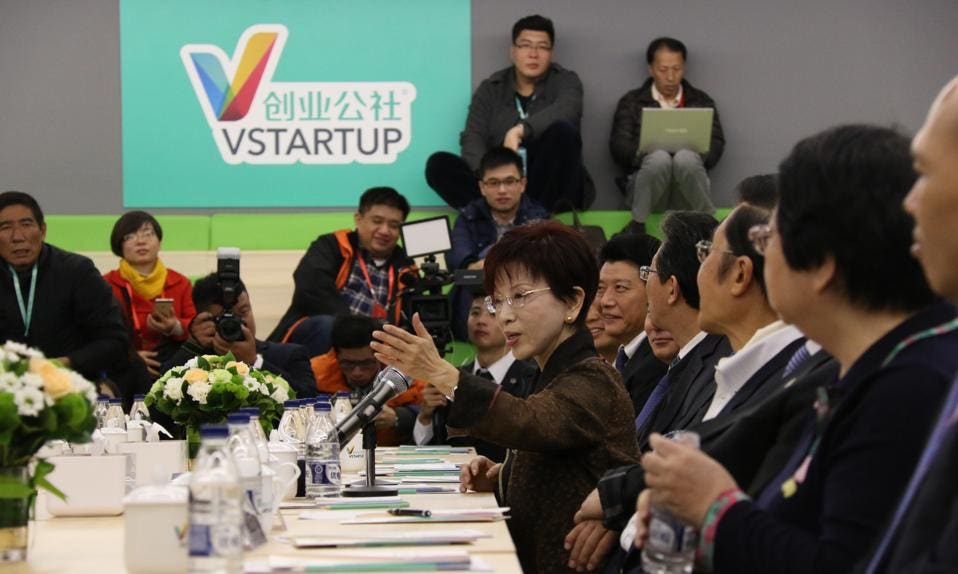 Taiwan’s government says many of the island’s young entrepreneurs are ready to seek their fortunes in China because mainland officials are offering incentives for them to launch their startups in the world’s second-largest economy. China has been reaching out to Taiwan’s investors as part of its efforts to bring self-ruled Taiwan closer to the mainland. China claims sovereignty over the island, where a government opinion survey released in January showed that more than 80% of its citizens prefer autonomy.

But only 1% of the Taiwanese-backed startups in China succeed, according to Taiwan’s Mainland Affairs Council. “They’ve run into some difficulties,” says the council’s spokesman Chiu Chui-cheng. “We’ve reminded our youth to beware of the risks.”

Startups tend to fail due to a lack of savvy about China’s business environment, not the level of incentives, people close to the market say, and they tend to find success by localizing their businesses.

Localizing might come easier to Taiwanese founders compared to peers further afield. They speak China’s official language and get the culture, says Lin Ta-han, CEO of the crowd-funding consultancy Backer-Founder in Taipei.

To help, government agencies in China are said to be offering tax breaks, fast-track permits to set up offices and subsidies for startups in sectors such as healthcare. “For truly small enterprises or for first-time startup founders, these are definitely incentives,” Lin says.

A startup incubator near Shanghai, for example, is offering free office space, subsidized rent for housing and tax breaks, according to a report in the Japan Times. Some entrepreneurs can qualify for up to $31,000 in cash. About 50 other hubs like this one are spread around China. These measures complement 31 broader incentives that China introduced in February 2018 to bring Taiwanese investors and workers over. Those measures cover breaks on taxes and land use. Taiwan’s government responded with its own rack of incentives to keep business people onshore.

More on Forbes: China Now Boasts More Than 800 Million Internet Users And 98% Of Them Are Mobile [Infographic]

Among the more successful Taiwanese-operated startups, MIT Media Lab graduate Edward Shen sold his Taipei-based startup StorySense Computing in 2015 to a firm in Beijing, according to a report from Tech in Asia. His company’s flagship product was a phone number search app called WhatsTheNumber.

Incentives alone won’t be enough to ensure success in China, says Steven Ho, a former Yahoo employee in Taiwan who moved to the mainland in 2012 and started a company that helps new brands enter the market. Internet startups must understand that “there’s the internet and the China internet, two different worlds,” says Ho, 51, and back in Taipei running a company with 400 employees. China’s internet is dominated by local firms and government controls. Startups from anywhere, incentivized or otherwise, need to adapt their businesses to the local conditions rather than continue operating as did at home, he says.

“The absolute number of people in China is big, but that doesn’t correlate to the number of startup successes,” Ho says.

Taiwan’s Mainland Affairs Council reiterates the message by reminding entrepreneurs that the competition in China is “stiff” and some founders may not adapt well to a different set of laws, customs and societal norms there. And perhaps most important of all–a different financial system.

To get paid online in China normally requires a deal with the domestic payment services Alipay or Wechat, which “tend to be stricter on the services that can be sold” compared to overseas peers, says Danny Levinson, past chairman of the American Chamber of Commerce Shanghai’s IT committee.

As a news reporter I have covered some of everything since 1988, from my alma mater

Chinese President Xi Jinping’s mantra that homes should be for living in is falling on deaf ears, with tens of millions of apartments and houses standing empty across the country. Soon-to-be-published research will show roughly 22 percent of China’s urban housing stock is unoccupied, according to Professor Gan Li, who runs the main nationwide study. That adds up to more than 50 million empty homes, he said. The nightmare scenario for policy makers is that owners of unoccupied dwellings rush to sell if cracks start appearing in the property market, causing prices to spiral……….