Here’s how it works. A consumer downloads the BIGtoken app, then he or she completes actions in the app such as answering questions and surveys, checking into locations, referring friends and family, and connecting their social media networks and bank accounts. The consumer gets rewarded in points for every action completed in the app. From there the consumer can redeem their points for cash or gift cards, or they can choose to donate their earnings to help fund a charity organization.

With BIGtoken, consumers get full control of what data is shared and who can access it. Thus within the app, people can easily opt in and opt out of specific advertising segments or specific advertisers.

The proposition seems to be catching on as the company says that it already has 11-plus million subscribers in just a little over a few weeks.  SRAX says that it has also been asked to integrate BIGtoken with financial institutions such as JP Morgan Chase and Citibank as well as prominent media companies such as Hulu and iHeart Radio. 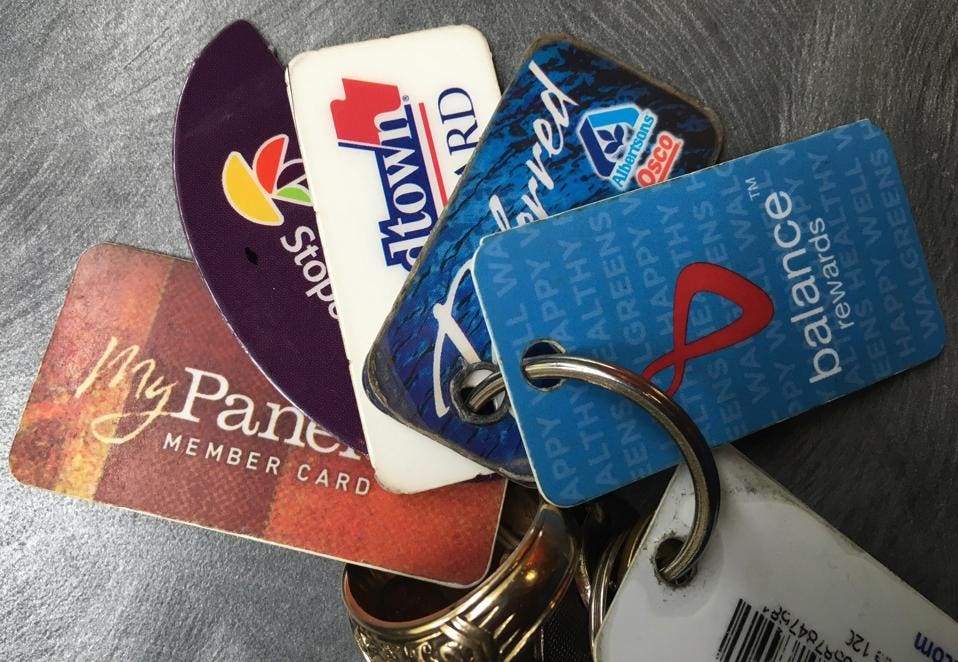 With such innovations, the industry is clearly poised for massive change.  In fact, K&H Connection believes the following predictions will be key to track.  Look for processing within branded currency to become less expensive.  The ability to tie together multiple data points across a transaction will become automatic. Gift cards and loyalty points will be able to be used cross-border. And, or course, spending crypto will be fully integrated into the branded currency space.

With BIGtoken, consumers get full control of what data is shared and who can access it.

When you trade in your credit card rewards for a heap of cash back or travel credit, your moment of elation may be interrupted by a sobering thought: are these rewards taxed? After all, the IRS taxes investment income, cryptocurrency and casino winnings, so it would make sense for there to be some kind of credit card rewards tax. Unfortunately, it’s an issue that takes some digging to get to the bottom of, and even then, the answer isn’t completely clear-cut. To learn about the law surrounding taxes on credit card rewards and find out if you need to fret about giving the IRS its due, keep reading.

This would be an easy question to answer if there was a law that definitively stated whether credit card rewards are subject to taxation, but there currently isn’t one. The IRS may push for such a law soon, since credit card intro bonuses are very generous right now and it may want to start regulating them, but that’s just speculation. Instead, all the legal precedent we have to go on is one IRS announcement and one tax court decision. The announcement, made in 2002, says that frequent flyer miles and other promotional items that you receive as the result of business travel, but that you use for personal purposes, do not produce a tax liability. However, it also says that exception doesn’t apply to travel or other promotional benefits that you convert into cash, or to compensation that is paid in the form of promotional benefits. Since many credit card issuers let you trade their rewards for statement credit or cash, lawyers could interpret that to mean there is a credit card rewards tax.

The court’s decision in the 2014 case Shankar and Trivedi v. Commissioner of Internal Revenue was similar. In the case, couple Parimal Shankar and Malti Trivedi failed to report to the IRS airline tickets that they had purchased with rewards points gained from opening a bank account. The couple argued that the dollar value of the rewards points shouldn’t count as income, since they received it as part of a promotional offer, but the U.S. Tax Court ruled against them.

Tax experts lean toward no

Even though both of the precedents mentioned above make your chances of avoiding a rewards tax look grim, some experts say credit card rewards are largely tax-free. Because you have to spend money in order to earn credit card rewards, whether you’re receiving cash back on your purchases or meeting the spending requirement for an intro bonus, apparently the IRS views those rewards as more of a rebate or discount rather than taxable income. Additionally, even if the IRS taxed credit card rewards, you wouldn’t have to worry about reporting that money unless it met or exceeded $600 per credit card issuer. That’s because $600 is the minimum amount of money you can report on a 1099 form for miscellaneous income, so any amount below that is safe from taxation.

While your credit card rewards are probably safe, the same can’t be said for other financial rewards. In 2012, Citi (a NextAdvisor advertiser) shocked a lot of customers by mailing 1099 forms out to anyone who took advantage of a promotional offer that gave new banking customers a large amount of frequent flyer miles. Citi determined the value of the miles given exceeded $600 per customer, so everyone who received the miles had to pay taxes on them. What’s the takeaway from this? If a reward (including a credit card reward) only requires you to sign up for an account and doesn’t entail spending any money, the IRS is much more likely to view that as a gift, payment or prize and tax it if it’s worth at least $600.

In conclusion, if you’re crazy about earning credit card cash back or points, you shouldn’t fear running into a rewards tax. If for some reason you do receive a 1099 form in the mail from your credit card issuer, though, make sure you factor it into your taxes to stay square with the IRS. For more answers to any credit card question you can think of and then some, check out our credit cards blog.