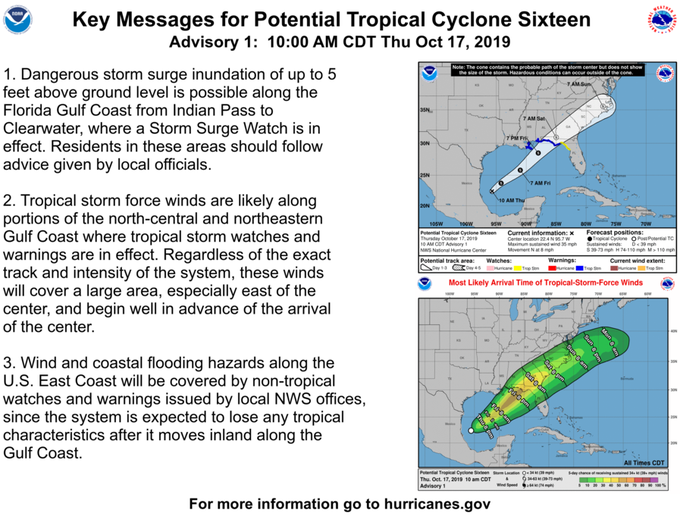 The streets of Tokyo outside my window are currently getting a little quieter, but there is absolutely no sense of panic in Japan’s capital. Typhoons are common-place in Japan, and the infrastructure has been built to withstand regular storms each year.

There are two major sporting events in Japan this weekend; the Rugby World Cup which has now canceled two games. England versus France and Scotland versus Japan. The other major event is the Japanese Grand Prix, who have moved qualifying to Sunday, with the race going ahead almost immediately afterwards.

The biggest impact will likely be on flights. The eye of the storm is 55 miles wide alone, and satellite imagery shows the entire storm is currently larger than the entire nation of Japan. Hagibis will be one of the strongest typhoons to directly hit the island nation in decades.

All Nippon Airways have now canceled all domestic flights departing from Tokyo on Saturday. The capital looks set to receive a direct hit from the storm but no one in the capital seems to be too concerned at this point. Although the Meteorological Agency has classified the storm as “violent”—the highest strength categorisation—rail operators have so far only warned that there may be cancellations.

With a storm this size, or any major storm, safety is paramount, however, Japanese authorities seem confident with their planning preparations. Japan Airlines have followed ANA’s example and canceled 90% of domestic flights, yet both airlines are optimistic of early morning departures on Saturday which remain scheduled until 8am. Additionally, both airlines are hopeful that some international flights will resume by late Saturday evening.

Tokyo airports have been worst affected by the disruption, with both major Japanese carriers, ANA and JAL, canceling 558 and 540 flights respectively. Flight cancellations are being seen around the globe to and from Tokyo, with British Airways scraping flights from London, and flights to North America also being affected. Almost every major airline around the world has been impacted by one of the largest storms to ever hit Japan directly, but the feeling on the ground here is that disruption shouldn’t last beyond a 24-hour window.

Storm Hagibis’ has a diameter that covers an immense 1,400km. Until the very last moment, no-one or nowhere in vast areas of Japan is safe from this expansive storm.

The Time Of The Month: This weekend is a full moon, meaning that sea levels are higher than average. With potential storm surge and waves being predicted to be up to 13m in some areas, coastal flooding could be devastating.

Force: With wind gusts predicted to be over 240km/h, and a direct hit to Tokyo looking increasingly likely over the next few hours, Typhoon Hagibis could be one of the strongest storms to hit Japan in decades.

In terms of pressure, Hagibis could also be the strongest on record, ever. With a current pressure of 900 hPa, this is already lower than hurricane Dorian which devastated the Bahamas earlier this year, clocking in at a pressure of 910 hPa. The strongest Tropical Cyclone ever recorded was Typhoon Tip which reached 870 hPa and made landfall in the Philippines in 1979. All Japanese airlines suggest checking their websites before travelling tomorrow.

I spend 360 days a year on the road traveling for work discovering new experiences at every turn, trying out the best and the worst airlines around the world. I set the Guinness World record for being the youngest person to travel to all 196 countries in the world by the age of 25, and you could perhaps say I caught the travel bug over that 6-year journey. I now take over 100 flights every year and I am still discovering many new places, both good and bad, whilst writing about my experiences along the way. In addition to rediscovering known destinations, I visit some of the World’s least frequented regions such as Yemen to highlight untold stories. Join me on an adventure from economy to first-class flights, the best and worst airports, and from Afghanistan to Zimbabwe.

Source: The Century’s Strongest Super-Typhoon Hagibis Is About To Hit Japan—1,600 Flights Canceled

NASA has some good news, the world is a greener place today than it was 20 years ago. What prompted the change? Well, it appears China and India can take the majority of the credit.

In contrast to the perception of China and India’s willingness to overexploit land, water and resources for economic gain, the countries are responsible for the largest greening of the planet in the past two decades. The two most populous countries have implemented ambitious tree planting programs and scaled up their implementation and technology around agriculture.

The recent finding by NASA and published in the journal Nature Sustainability, compared satellite data from the mid-1990s to today using high-resolution imagery. Initially, the researchers were unsure what caused the significant uptick in greening around the planet. It was unclear whether a warming planet, increased carbon dioxide (CO2) or a wetter climate could have caused more plants to grow.

After further investigation of the satellite imagery, the researchers found that greening was disproportionately located in China and India. If the greening was primarily a response from climate change and a warming planet, the increased vegetation shouldn’t be limited to country borders. In addition, higher latitude regions should become greener faster than lower latitudes as permafrost melts and areas like northern Russia become more habitable.

The greening of the planet.

The United States sits at number 7 in the total change in vegetation percent by decade. Of course, the chart below can hide where each country started. For example, a country that largely kept their forests and vegetation intact would have little room to increase percent vegetation whereas a country that heavily relied on deforestation would have more room to grow.

Comparing the greening of various countries around the globe.

NASA used Moderate Resolution Imaging Spectroradiometer (MODIS) to get a detailed picture of Earth’s global vegetation through time. The technique provided up to 500-meter resolution for the past two decades.

Both China and India went through phases of large scale deforestation in the 1970s and 80s, clearing old growth forests for urban development, farming and agriculture. However, it is clear that when presented with a problem, humans are incredibly adept at finding a solution. When the focus shifted in the 90s to reducing air and soil pollution and combating climate change the two countries made tremendous shifts in their overall land use.

It is encouraging to see swift and rapid change in governance and land use when presented with a dilemma. It is something that will continue to be a necessary skill in the decades to come.

I am a geologist passionate about sharing Earth’s intricacies with you. I received my PhD from Duke University where I studied the geology and climate of the Amazon. I am the founder of Science Trends, a leading source of science news and analysis on everything from climate change to cancer research. Let’s connect @trevornace

Source: NASA Says Earth Is Greener Today Than 20 Years Ago Thanks To China, India

Before I discuss how weird that is, it is useful to explore Leslie’s history. Senior Meteorologist Alex Sosnowski laid out a timeline of Leslie on Accuweather’s website. I have summarize his timeline:Leslie initially formed as a subtropical storm in the middle of the Atlantic, Leslie becomes tropical on October 3rd, Leslie weakens to tropical storm on October 4th and remains at that level until October 9th,Leslie becomes a hurricane on October 9th…When you look at the latest projected track of Leslie, places like Portugal, Spain, and Morocco appear on the map. If you want to know just how odd this track is, consider a social media post from my colleague Dr. Tom Gill at University of Texas – El Paso…..

By 2030, we as a collective 7 billion humans will know our fate, or at the very least, the fate of the most vulnerable among us. A landmark report released on Sunday sets the clock ticking for humanity and its quest to keep global warming to within 1.5 degrees Celsius of pre-industrial levels. The report from the Intergovernmental Panel on Climate Change outlines what a world warmed by 1.5 degree Celsius would look like compared with the 2 degree Celsius warmer world enshrined in the Paris Agreement, and the pathways to get there…….