Handshakes could be forbidden under new workplace rules to circumvent costly sexual harassment allegations, and every employer may ban all kinds of physical touch to avoid uncertainty about what sort of touching is suitable.

It comes off the back of the #MeToo movement, with bosses rethinking their strategies and heading to a more black and white attitude, and some employers may put a full embargo on physical touch, but is this going a tad too far, especially when shaking someone’s hand? But they might say just no contact at all because there is no grey area’s then.

And according to a recent poll of 2,000 adults on Totaljobs, three out of four were keen for a full physical contact prohibition when at work, and it was pointed out that gestures such as putting your hand on someone’s back or giving a reassuring embrace could all come under the umbrella of being too personal.

It will still plausibly be safe to shake hands at work, except if your employer forbids it, in which event you will have to obey the rules, but it’s not only how you comport yourself in the office which matters either. The workplace does extend outside the office as well, the perfect example is the Christmas night out and staff behaviour when going to functions.

But indeed, isn’t this getting to be a little absurd, next you’ll not be permitted to make hand contact when getting change from a cashier in shops, and a handshake is consensual, when somebody puts out their hand to shake it, you consent by shaking it back, but if they keep their hand by their side or behind their back and it’s grabbed and shook against their will, then this is clearly physical assault, which is already covered in the law, so obviously there’s no call for a handshake ban, which would be complete insanity.

If anything, handshaking is social, polite, appropriate and NORMAL.

Perhaps we should go and work in France where men and women, men and men and women and women kiss each other when meeting, an extension to shaking hands, I can’t see this being banned any day soon, but we shouldn’t say women because apparently that sexist, or men for that matter, but HUMAN has man in it, so don’t use that either.

Is there a point to being politically correct, especially when it dictates our everyday lives? And the cultural niceties of the past that assisted human interaction is being denounced, but for what outcome? Because in the end what it will bring us down to is an emotionless society that will be undoubtedly controlled by our socially correct leaders, and it’s about time these minority, sad individuals, who want to dictate to others how they run their lives, to in no uncertain terms to “sod off”.

So, welcome to the unfortunate death of social norms, and the courtesy of a band of senseless society inept imbeciles.

Source: Handshakes Could Be Banned At Work 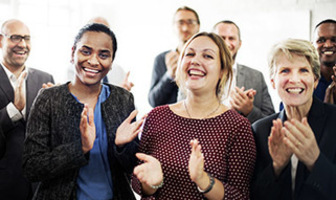 One of the key insights from the science of happiness is that our own personal happiness depends heavily on our relationships with others. By tuning into the needs of other people, we actually enhance our own emotional well-being. The same is true within organizations: those that foster trusting, cooperative relationships are more likely to have a more satisfied, engaged—and more productive and innovative—workforce, with greater employee loyalty and retention.

Empathy is a broad concept that refers to the cognitive and emotional reactions of an individual to the observed experiences of another. Having empathy increases the likelihood of helping others and showing compassion. “Empathy is a building block of morality – for people to follow the Golden Rule, it helps if they can put themselves in someone else’s shoes,” according to the Greater Good Science Center, a research institute that studies the psychology, sociology, and neuroscience of well-being. “It is also a key ingredient of successful relationships because it helps us understand the perspectives, needs, and intentions of others.”

Researchers distinguish between two types of empathy. Especially in social psychology, empathy can be categorized as an emotional or cognitive response. Emotional empathy consists of three separate components, Hodges and Myers say. “The first is feeling the same emotion as another person … The second component, personal distress, refers to one’s own feelings of distress in response to perceiving another’s plight … The third emotional component, feeling compassion for another person, is the one most frequently associated with the study of empathy in psychology,” they explain.

It is important to note that feelings of distress associated with emotional empathy don’t necessarily mirror the emotions of the other person. Hodges and Myers note that, while empathetic people feel distress when someone falls, they aren’t in the same physical pain. This type of empathy is especially relevant when it comes to discussions of compassionate human behavior. There is a positive correlation between feeling empathic concern and being willing to help others. “Many of the most noble examples of human behavior, including aiding strangers and stigmatized people, are thought to have empathic roots,” according to Hodges and Myers. Debate remains concerning whether the impulse to help is based in altruism or self-interest.

The second type of empathy is cognitive empathy. This refers to how well an individual can perceive and understand the emotions of another. Cognitive empathy, also known as empathic accuracy, involves “having more complete and accurate knowledge about the contents of another person’s mind, including how the person feels,” Hodges and Myers say. Cognitive empathy is more like a skill: Humans learn to recognize and understand others’ emotional state as a way to process emotions and behavior. While it’s not clear exactly how humans experience empathy, there is a growing body of research on the topic.

How Do We Empathize?

Experts in the field of social neuroscience have developed two theories in an attempt to gain a better understanding of empathy. The first, Simulation Theory, “proposes that empathy is possible because when we see another person experiencing an emotion, we ‘simulate’ or represent that same emotion in ourselves so we can know firsthand what it feels like,” according to Psychology Today.

There is a biological component to this theory as well. Scientists have discovered preliminary evidence of “mirror neurons” that fire when humans observe and experience emotion. There are also “parts of the brain in the medial prefrontal cortex (responsible for higher-level kinds of thought) that show overlap of activation for both self-focused and other-focused thoughts and judgments,” the same article explains.

Some experts believe the other scientific explanation of empathy is in complete opposition to Simulation Theory. It’s Theory of Mind, the ability to “understand what another person is thinking and feeling based on rules for how one should think or feel,” Psychology Today says. This theory suggests that humans can use cognitive thought processes to explain the mental state of others. By developing theories about human behavior, individuals can predict or explain others’ actions, according to this theory.

While there is no clear consensus, it’s likely that empathy involves multiple processes that incorporate both automatic, emotional responses and learned conceptual reasoning. Depending on context and situation, one or both empathetic responses may be triggered.

Empathy seems to arise over time as part of human development, and it also has roots in evolution. In fact, “Elementary forms of empathy have been observed in our primate relatives, in dogs, and even in rats,” the Greater Good Science Center says. From a developmental perspective, humans begin exhibiting signs of empathy in social interactions during the second and third years of life. According to Jean Decety’s article “The Neurodevelopment of Empathy in Humans,” “There is compelling evidence that prosocial behaviors such as altruistic helping emerge early in childhood. Infants as young as 12 months of age begin to comfort victims of distress, and 14- to 18-month-old children display spontaneous, unrewarded helping behaviors.”

While both environmental and genetic influences shape a person’s ability to empathize, we tend to have the same level of empathy throughout our lives, with no age-related decline. According to “Empathy Across the Adult Lifespan: Longitudinal and Experience-Sampling Findings,” “Independent of age, empathy was associated with a positive well-being and interaction profile.”

And it’s true that we likely feel empathy due to evolutionary advantage: “Empathy probably evolved in the context of the parental care that characterizes all mammals. Signaling their state through smiling and crying, human infants urge their caregiver to take action … females who responded to their offspring’s needs out-reproduced those who were cold and distant,” according to the Greater Good Science Center. This may explain gender differences in human empathy.

This suggests we have a natural predisposition to developing empathy. However, social and cultural factors strongly influence where, how, and to whom it is expressed. Empathy is something we develop over time and in relationship to our social environment, finally becoming “such a complex response that it is hard to recognize its origin in simpler responses, such as body mimicry and emotional contagion,” the same source says.

In the field of psychology, empathy is a central concept. From a mental health perspective, those who have high levels of empathy are more likely to function well in society, reporting “larger social circles and more satisfying relationships,” according to Good Therapy, an online association of mental health professionals. Empathy is vital in building successful interpersonal relationships of all types, in the family unit, workplace, and beyond. Lack of empathy, therefore, is one indication of conditions like antisocial personality disorder and narcissistic personality disorder. In addition, for mental health professionals such as therapists, having empathy for clients is an important part of successful treatment. “Therapists who are highly empathetic can help people in treatment face past experiences and obtain a greater understanding of both the experience and feelings surrounding it,” Good Therapy explains.

Empathy plays a crucial role in human, social, and psychological interaction during all stages of life. Consequently, the study of empathy is an ongoing area of major interest for psychologists and neuroscientists in many fields, with new research appearing regularly. Lesley University’s online Bachelor of Arts in Psychology gives students the opportunity to study the field of human interaction within the broader spectrum of psychology.