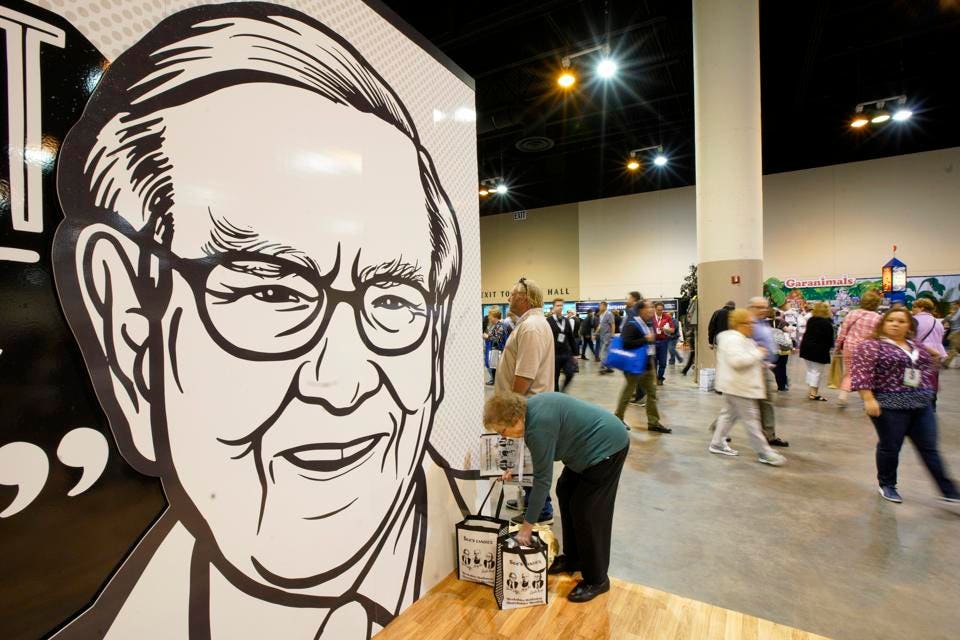 A Berkshire Hathaway shareholder arranges her shopping next to a large drawing of Chairman and CEO Warren Buffett, during a shareholders shopping event in Omaha, Neb., Friday, May 3, 2019, one day before Berkshire Hathaway’s annual shareholders meeting. An estimated 40,000 people are expected in town for the event, where Chairman and CEO Warren Buffett and Vice Chairman Charlie Munger will preside over the meeting and spend hours answering questions. (AP Photo/Nati Harnik)

Berkshire Hathaway’s shareholders’ meeting as in past years yielded various insights on Warren Buffett’s and Charlie Munger’s insights on the markets, politics, tech stocks, past mistakes and many other topics.

Further Buybacks On The Cards

It should come as no surprise that Buffett and Munger are considering further buybacks of Berkshire stock. With a large, and growing, cash pile and limited deal opportunities to date, they are likely to use cash to repurchase Berkshire shares as the fallback option. In fact, the pair used answers to certain questions, such as regarding Brexit in the U.K. to remind the audience that they are very willing to make acquisitions in Europe should they see the right deal at the right price. They feel that Berkshire is typically considered for deals in the U.S.. Yet, internationally they have more work to do to have Berkshire in consideration for a large business sale. Still, the emphasis on buybacks suggests that there is little in the deal pipeline for now, though of course that could change quickly. Buffett and Munger would love to see more attractive deals, but absent attractive opportunities, stock buybacks are the default.

Another Bite Out Of Apple?

Buffett and Munger were both very positive on current holding Apple, and Apple CEO Tim Cook was also at the event. It seemed clear that Buffett was quite willing to up his Apple stake at the right price.

Various objections such as potential regulation of Apple’s app store were raised in questions, though Buffett didn’t dismiss those concerns entirely, he mentioned that what has hurt the most is that the stock has gone up. That, the CEO’s presence and the fact that Buffett didn’t go out of his way to make the detailed bull case on Apple all suggest he make be angling to up his stake at the right price, even though Apple is currently Berkshire’s second largest public holding behind Coca-Cola.

Over his lifetime, Buffett’s investing approach has evolved and it continues to. In his early years, Buffett loved buying so-called cigar butt stocks, as popularized by his early mentor Ben Graham. This means stocks that may have been poor companies, but were trading well below the value of assets that could be sold realizing a profit for investors. Such deals are harder to come by now. As such Buffett looks more for great businesses at reasonable prices, a direction that Munger has clearly prodded him in. However, now Buffett talks of value investing in broader more creative terms, such that any stock where the likely expected cashflows exceed the price can be attractive, even if not cheap in on the traditional metrics and ratios associated with value investing.

Indeed, as Buffett pointed out, that definition is so broad that just about anyone can be considered value investors. This broadening of philosophy may lead to some new categories of investment in future, for example a lot of questions focused on some of the tech names that have seen such strong price performance in recent years, and which Berkshire has largely missed out on.

So though Buffett’s approach continued to be refined, its core principles remain the same in looking for great businesses at attractive prices with sound management in place. In reviewing Buffett and Munger’s comments, one is left with the feeling that they are seeing few bargains in this market and buybacks paired with watching and waiting for certain key holdings such as Apple to fall so they might add more is the current strategy. Aside, from the comments at the meeting, the fact that the company is sitting on over $100 billion of cash and short-term securities at the end of 2018 reinforces that Buffett and Munger aren’t seeing the opportunities they would hope for in the current environment.

Articles educational only, not intended as investment advice.