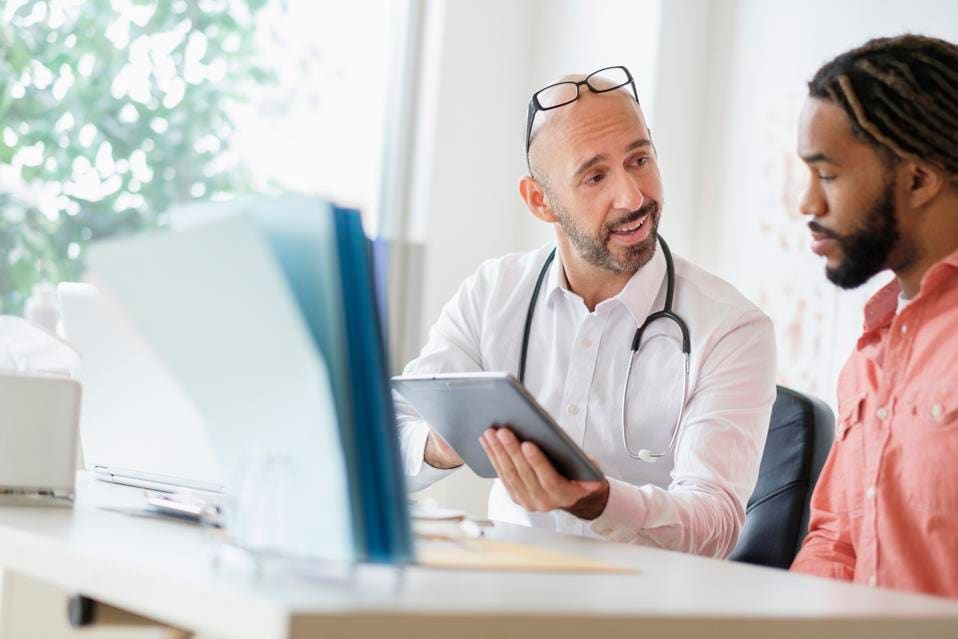 Obesity, hypertension and diabetes. These are some of the most prevalent health conditions that plague the American population, yet they can be managed through a variety of lifestyle changes, diet and, in some instances, prescription medications. As traditional Western medicine continues to evolve into holistic approaches, more physicians are becoming increasingly knowledgeable in nutrition and are shifting their mindset from how to treat the health condition to how to prevent the health condition in the first place.

As the CTO of a company that creates daily supplement regimens using artificial intelligence, I’ve seen firsthand how AI is making it even easier for healthcare practitioners to serve up nutrition to their patients right in their offices and at the patients’ homes.

Three-quarters of Americans take dietary supplements, according to the Council for Responsible Nutrition (CRN). As more and more Americans are taking nutrition into their own hands by using vitamins and supplements, it is crucial to understand that a significant number of people — almost 40% — don’t feel they need to speak with their doctor before adding a supplement to their daily routine. Thanks to AI, more doctors can now have intentional conversations with their patients about their nutrition and their use of daily vitamin supplements. Likewise, AI puts big data at doctors’ fingertips so they can easily access, cross-reference and provide intelligent recommendations on how to balance the ingredients found in the prescription medication with the ingredients that make up daily vitamins and supplements.

Beyond nutrition discussions, AI is making a profound impact in the healthcare space as a whole. For example, Philips has combined AI and other technologies with knowledge of the clinical and operational context in which they are used for a people-centered approach that the company calls “adaptive intelligence.” As it relates to imaging technology such as an MRI or X-ray, specifically, Philips provides AI-powered and easy-to-use tools that are embedded right into a doctor or technician’s workflow. The result is improved patient care and less time spent waiting for a patient’s history or lab results.

Another promising AI application comes from Sense.ly, a virtual nurse assistant that’s available through an app. While it may seem trivial or unnecessary, its goal is to keep the line of communication open between patients and healthcare providers between office visits. According to Sense.ly’s CEO, this product is “always improving, learning more and more from patients, and as we partner with more organizations, bring in more disease states and research, we’ll layer in more protocols and content.”

A nutrition program that includes in-depth discussions and analysis with a healthcare practitioner will put a patient on the right path for ongoing wellness. By adding convenient access to high-quality vitamins and supplements through a subscription model where the personalized vitamins are delivered directly to a patient’s door, patients will be motivated to care for their bodies each and every day.

We’ve seen the success of medication delivery to a patient’s home through Amazon’s acquisition of PillPack, an online pharmacy, for more than $700 million in 2018. This is the future of healthcare — one that is led first through the integration of AI into a physician’s practice.

• Let AI make the recommendation. Utilize big data and the growing number of personalized nutrition programs that leverage AI to identify one of the trillions of combinations of vitamins and nutrients best suited for the patient, or input specific recommendations directly into the technology platform

AI is mutually beneficial for the patient and practitioner and is changing the way doctors are able to provide holistic care.

Forbes Technology Council is an invitation-only community for world-class CIOs, CTOs and technology executives. Do I qualify?

Source: How AI Is Making It Easier For Healthcare Practitioners To Serve Up Nutrition To Patients

Stop counting calories. It’s the clock that counts.That’s the concept behind time-restricted feeding, or TRF, a strategy increasingly being studied by researchers as a tool for weight-loss, diabetes prevention and even longevity. In TRF, you can eat whatever you want and as much as you want—just not whenever you want. Daily food intake should be limited to a 12-hour window, and ideally cut down to eight to 10 hours. But you can pick the hours you want to eat. (Note: This doesn’t mean you should stuff your face with cupcakes. Experts say you should dine as you normally would. Only noncaloric drinks like water and black coffee are allowed during fasting hours……..

Children today are more likely to consume foods that are delicious rather than nutritious, and most foods that come under the delicious category are usually either highly sweetened or salted, either way the delicious choice is not good for the child at all. It is up to the adult to ensure the meals a child consumes us as balanced as possible. With balanced meals, the child will be able to have all the necessary nutrition needed for optimum and normal growth patterns both mentally and physically……

A visit to the supermarket these days can feel more like walking through a pharmacy, with an ever-expanding range of milks, yoghurts, pills, powders and speciality foods promoting their “probiotic” prowess.

Advocates of probiotics have hailed them as the answer to all sorts of health issues and conditions. But what exactly are probiotics? And, more importantly, should you be taking them?

Probiotics are scientifically defined as “live micro-organisms which, when administered in adequate amounts, confer a health benefit on the host”. In simple terms, they’re “good” bacteria that are beneficial to the body.

Probiotics exist naturally in some foods (such as some types of yoghurt and fermented vegetables such as pickles and sauerkraut), but can also be taken in dietary supplement form, via products such as Yakult and Inner Health Plus.

While our digestive system ordinarily contains trillions of microbes, including both “good” and “bad” bacteria, sometimes the balance between these can get out of whack. Diseases, poor lifestyle behaviours (such as not eating enough fruit and vegetables, heavy drinking, smoking, and physical inactivity) and ageing can all disrupt this balance.

By many accounts, probiotics can improve the number and diversity of “good” gut bacteria that help to keep our digestive system healthy and working efficiently. As such, probiotics have been proposed to:

However, most scientific research on the health benefits of probiotic supplementation seems to have been done in people with existing health problems. Evidence supporting the health benefits of probiotics in healthy adults is very limited. Probiotic supplements are most likely to be consumed by the general (and otherwise healthy) population, despite this group receiving relatively little documented benefit.

We reviewed the scientific literature (45 original studies) on probiotic supplementation in healthy adults. Our findings, published in the European Journal of Clinical Nutrition, found that giving healthy adults live bacteria (either in yoghurt, capsules, or drinks) can have a few benefits:

1) it can increase the concentration of “good” bacteria. So, if an imbalance of digestive system bacteria does occur in healthy adults (due to poor lifestyle, the use of antibiotics, or ageing), probiotic supplementation may help restore the balance

3) it can increase the population of “good” bacteria in and around the vagina. From the four studies conducted in this area, all four demonstrate improvements in vaginal lactobacilli after probiotic capsules or suppositories were used. This may help prevent urinary tract infection and bacterial vaginosis

4) there is some evidence that it can boost the immune system, and help reduce the incidence, duration and severity of the common cold. While the exact mechanism for this is not clear, probiotics might influence immune responses by stimulating production and improving activity of cells that fight respiratory infections. But only three studies have shown these benefits in healthy adults.

While this sounds like great news for probiotics, let’s not get carried away. Our review also found the changes appear to be short-lived. In other words, you need to keep taking the probiotic supplements for the effects to last. If you stop taking them, your gut bacteria are likely return to their pre-supplementation condition within one to three weeks.

You may be able to get longer-lasting changes by “feeding the healthy bacteria”. Like all living organisms, bacteria need food to survive. Foods that are high in dietary fibre, such as fruit and vegetables, can be used as energy sources (or so called “prebiotics”) for these bacteria.

So if you have a poor diet (you eat too much take-away food and not enough fruit, vegetables and whole-grain products, or you drink alcohol too much and too often) and don’t exercise regularly, your digestive bacteria may benefit from probiotic supplements, though you’ll have to keep taking them to get lasting effects.

If everyone who read the articles and like it, that would be favorable to have your donations – Thank you.

If you were going to hire an expert on this, to show you how it’s done, you could easily find yourself investing hundreds of dollars for this sort of coaching. In fact, many people invest hundreds and thousands of dollars to get into coaching programs or attend workshops…

But, you won’t have to invest anywhere near that today. This cheat sheet is a handy checklist that makes it easy to get started. It breaks up the entire guide into easy-to-follow steps so that you can make sure you have all the highlights of everything covered inside right at your fingertips.

This makes it easy to track your progress and stay focused every step of the way. Some people learn better by looking at a mind map. This mind map gives you an overview of everything covered inside the guide. You can also print it out for quick reference anytime you need it!

A hectic lifestyle has made it difficult to maintain a healthy food habit, leaving the body vulnerable to health risks. Without realizing, it creates health problems which could lead to diseases. People realize the importance of healthy eating only when they suffer from diseases like malnutrition, obesity, etc.

A healthy diet plan can help the body to remain active for longer periods and allow a healthy living. A healthy and balanced diet helps to maintain the required body weight with increasing general well-being. A healthy diet has a balance of bread, potatoes, cereals, fruits, vegetables, milk, meat, fish or milk/meat alternatives, and minimum quantity of fat and sugar.

The body cannot get all the essential nutrients from a single food. The body has to depend on a wide variety of healthy foods with adequate amount of vitamins, minerals, and fiber.

You’ll get instant access to a PDF version of this guide along with download links for the rest of the bonuses. There’s no waiting… You can get started RIGHT NOW.You can begin seeing results extremely quickly… Within days and sometimes even within hours of getting started. The more you make this a part of your daily life, the better the results you’ll get.